A new study suggests that eating a diet high in whole grains and cereal fibers every day may reduce your risk of premature death.

The results published in BMC Medicine, the open access journal, also showed cereal fibers to be associated with reduced risk of deaths in varying degrees for chronic diseases including cancer, heart disease, respiratory disease and diabetes. "Our study indicates that intake of whole grains and cereal fiber may reduce the risk of all-cause mortality and death from chronic diseases such as cancer, heart disease, diabetes, and respiratory disease," said Lu Qi, lead researcher, Harvard Public School of Health.


The study included 367,442 people above age 50. They were followed for an average of 14 years. The researchers found that consumption of an average 34 grams of whole grains per 1,000 kilocalories (kcal) per day was associated with a 17% reduced risk of premature death compared to those consuming an average of 3.98 grams per 1,000 kcal per day. Even when they accounted for factors such as health status, physical activity and obesity status the reduction remained the same.

Whole grains are the entire seed of a plant that is used for food and contains the germ, bran and endospore, such as wheat, oat and quinoa. They are rich sources of dietary fiber and other nutrients such as minerals and antioxidants. 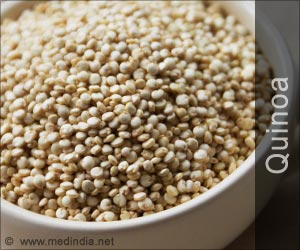