Dietary compound found in tomatoes has shown to improve sperm quality, reveals a new study. This discovery could transform the outlook for men with fertility problems. The findings of the study are published in the European Journal of Nutrition. 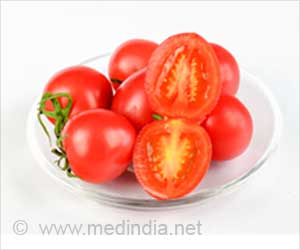 The discovery could lead to better ways to reduce the damaging impact of modern living on reproductive health. Of all infertility cases, approximately 40 to 50 percent are due to "male factor" infertility.


‘Men taking a dietary supplement of LactoLycopene, which is found in tomatoes, had almost 40 percent more fast swimming sperm with improvements to sperm shape and size. ’

The first-ever double-blind, randomized controlled trial to assess the impact of giving men a dietary compound called LactoLycopene was led by Allan Pacey, Professor of Andrology Reproduction and Head of the University of Sheffield's Department of Oncology and Metabolism, and Dr. Liz Williams, a leading specialist in Human Nutrition at the University of Sheffield. The team discovered it is possible to increase the proportion of healthy shaped sperm (sperm morphology) and boost 'fast swimming' sperm by around 40 percent.

Lycopene can be found in some fruits and vegetables, but the main source in the diet is from tomatoes. Lycopene is a pigment that gives tomatoes their red color, but dietary Lycopene is poorly absorbed by the human body, so the compound used for the trial was a commercially available formulation called LactoLycopene; designed by FutureYou Cambridge to improve bioavailability.

The 12-week trial designed by Dr. Williams involved 60 healthy volunteers aged 19 to 30. Half took LactoLycopene supplements, and the other half took an identical placebo (dummy pills) every day for 12 weeks. Neither the researchers nor the volunteers knew who was receiving the LactoLycopene treatment and who was receiving the placebo. Sperm and blood samples were collected at the beginning and end of the trial.

"We didn't really expect that at the end of the study, there would be any difference in the sperm from men who took the tablet versus those who took the placebo. When we decoded the results, I nearly fell off my chair," said Professor Pacey, a world expert in male reproduction.

"The improvement in morphology - the size and shape of the sperm, was dramatic. We used a computer system to make these measurements, which takes a lot of the human error out of the results. Also, the person using the computer didn't know who had taken LactoLycopene and who had taken the dummy pills either.

"This was the first properly designed and controlled study of the effect of LactoLycopene on semen quality, and it has spurred us to want to do more work with this molecule."

"We were surprised by the improvement in sperm quality shown by the results," said Dr. Williams.

"This was a small study, and we do need to repeat the work in bigger trials, but the results are very encouraging. The next step is to repeat the exercise in men with fertility problems and see if LactoLycopene can increase sperm quality for those men and whether it helps couples conceive and avoid invasive fertility treatments."

Her team, which included three other researchers Madeleine Park, Aisling Robinson, and Sophie Pitt, is hoping to embark on the new study as soon as possible.

Professor Pacey said the work so far has not investigated the mechanism for Lycopene's beneficial action, but it is a known powerful antioxidant, so it is potentially inhibiting the damage caused by oxidation of sperm, which is a known cause of male fertility problems. He believes this antioxidant effect is key in producing the improvements in sperm quality seen in the trial and is hoping to investigate this more.

Tomatoes are a rich source of potassium and vitamins. Tomatoes are used in the manufacture of skin care products. They have a whole lot of health benefits and one prominent benefit is its role in reducing prostate cancer risk.

Sperms are continually produced in men due to the presence of spermatogonial stem cells in the testes. Transplantation of these stem cells can help treat men who have infertility.

Yo home sperm test helps men to assess the sperm motility and count in privacy of his home with no embarrassment in visiting the physician's office.

Artificial Insemination is a medical procedure usually used to treat infertility. In this procedure, sperm is placed into a female''s vagina, uterus or fallopian tubes by artificial means.

Athletes can be physically fit by consuming a well balanced nutritious diet, which keeps them mentally alert not only during and after the sports events but all around the year. Here are some simple and essential diet and nutrition tips for athletes.

Food Combinations that Affect Your Well Being

Premature ejaculation is ejaculation that occurs before either of the partners is ready for it.

Promote Your Health with Nutrition Supplements

As a part of preventive care one should take a good quality nutritional supplement containing antioxidants and micronutrients in amounts, which promote health.

Spirulina is a blue-green algae that is grown globally as a health supplement. Of late there is an effort to promote spirulina as the food of the future.

Genetics of Male InfertilityArtificial InseminationVaricocelePremature EjaculationSex NumbersSpirulinaUndetected Nutrient Deficiencies: the Cause of Ill HealthDiet and Nutrition Tips for AthletesPromote Your Health with Nutrition SupplementsFood Combinations that Affect Your Well Being