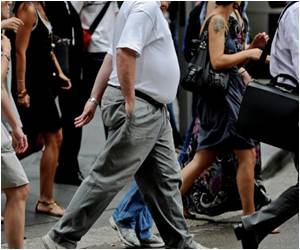 Scientists are moving a step closer to developing a pill that can prevent obesity.

The breakthrough could lead to a long-lasting cure for the problem, which has reached epidemic proportions in the UK.

Researchers from the University of East Anglia said that their findings could lead to development of drugs that can be given in childhood to those predisposed to obesity or later in life as people pile on the pounds, the Daily Express reported.


But they warn that translating the work to humans is between five and 10 years away.

Lead researcher Dr Mohammad Hajihosseini, of the university's School of Biological Sciences, said, "Unlike dieting, translation of this discovery could offer a permanent solution for tackling obesity."
Advertisement
It was previously thought that the nerve cells in the brain associated with appetite regulation were generated entirely during an embryo's development in the womb and their numbers were fixed for life.

But research published in the Journal of Neuroscience has identified stem cells capable of generating new appetite-regulating neurons in the brains of adult rodents.

New Diet Pill Can Help Lose Weight Within Weeks
A diet pill that can help women drop a dress size within a matter of weeks could be available ......