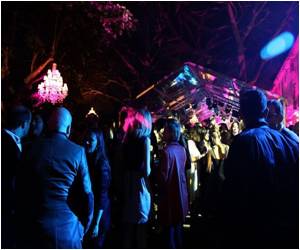 After a spate of increasingly audacious thefts highlighted the ease with which jewel thieves can strike, security is being tightened in Cannes this year.

A year ago, as film festival luminaries partied into the early hours, a thief broke into the hotel room of an employee of Swiss jewellers Chopard and made off with a $1.4 million haul in a crime straight out of Alfred Hitchcock's "To Catch a Thief".
Advertisement

In another twist, the theft came hours after the premiere of "The Bling Ring", Sofia Coppola's film about a group of Californian teenagers who break into celebrity mansions to steal designer items while their A-list owners are out on the red carpet.


Twelve months on, with the jewels still missing and the trail gone cold, Cannes authorities are preparing to deploy nearly 700 police for the 2014 festival.
Advertisement
Scott Selby, co-author of "Flawless" about the $100 million Antwerp Diamond Centre heist in 2003, said the thieves at last year's festival took advantage of "relatively lax" security to snatch items that were normally well protected.

"The Chopard employee left the jewellery in a hotel safe deposit box in her hotel room. That was a mistake," he told AFP in a telephone interview from the US.

"All someone needed to do was break in and rip the safe from the wall. The thief did not even need to know how to break it open, he or she simply took it with them to open at their leisure."

In a second theft during last year's festival, a $1.9 million diamond necklace by de Grisogono was taken from under the noses of a reported 80-strong contingent of security guards during a party at the exclusive Hotel du Cap-Eden-Roc near Cannes.

Staff found the necklace, which was on display at the party, missing at the end of the evening.

Two months later, thieves raised the stakes when they struck again, this time taking jewellery worth $142 million from the Carlton Hotel where "To Catch A Thief" was partly set.

A man with a semi-automatic pistol, his head covered in a cloth, walked into an exhibition being held in a wing of the hotel with direct access to the street.

The robber cleared the display cabinets before simply melting into the crowd on the Croisette, the Cannes promenade.

Selby said the theft had at least some of the hallmarks of the gang of robbers known as the Pink Panthers but could equally have been the work of another "clever thief" who spotted an opportunity.

The Panthers are wanted for robbing items worth $450 million from luxury stores around the world since 1999.

"It was very well planned, very clever and very audacious," he said.

"The exhibition was in a hotel that was not set up to be a vault, it's not a protected thing, it's a hotel in a busy city."

Insurers Lloyd's of London have offered a reward of up to $1.3 million for information leading to the recovery of the Carlton exhibition jewels.

Jewel thefts, however, are notoriously difficult to solve.

"It's definitely very hard to catch people because it's not the sort of thing that people talk about and there is a short window to catch someone," Selby said.

"It's possible that later there's some kind of snitch or they catch somebody for something else who tells them about it but the loot will have been long gone."

The Carlton jewels would have been smuggled out of France and the stones resold after any certificate numbers inscribed on the sides had been polished off.

Unlike art theft, jewel theft was lucrative because it was relatively easy to get away with, Selby said.

Only the most unusual stones would present a problem for the thieves.

"A really nice necklace that's got a giant pink stone or a giant yellow stone that is going to be very identifiable becomes tricky."

"That's where you have a choice to either sell to a buyer willing to buy a stolen item, often in Hong Kong or in the Emirates."

"Or what you have to do is find a corrupt polisher and cleaver in Antwerp and to turn it into two stones or shave a little bit off and put it in a new shape," he said.

The vast majority of these stones, however, would have been one or two carat white or yellow stones that were easy to resell.

Such stones were very probably in engagement rings "that someone is wearing in London right now", he added.

Cannes-winning Film Leads To Health Reforms in Bulgaria
An award-winning documentary about a hard-working Bulgarian paramedic crew has highlighted problems ...

Dream Job of Being Cannes Party Critic Not for the Faint of Heart
Being a party critic at Cannes must surely rank near the top among the world's dream jobs, but one ....