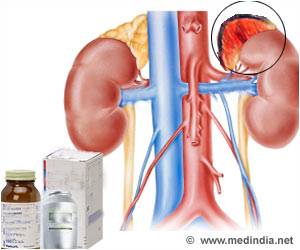 Diagnosis of diseases of adrenal gland have long been difficult, but a new technology of using saliva and smartphone is now affordable and easy way of diagnosis and monitoring the disease.

Adrenal gland disorders arise when the adrenal glands do not work properly. Adrenals may produce too much hormones or too little hormones.
Advertisement

Adrenal diseases are commonly overlooked because measuring cortisol, the so-called "stress hormone" that is released by the adrenal glands as part of the fight-or-flight mechanism, is costly and complicated, especially for those with limited resources, say researchers.


"When cortisol levels are overlooked too many people suffer and die because of excess or insufficient cortisol," said Joel Ehrenkranz, MD, director of diabetes and endocrinology at Intermountain Medical Center, and lead researcher of the project.

Pheochromocytoma is a rare tumor of the adrenal glands that secretes the catecholamines, adrenaline and noradrenaline. Symptoms, diagnosis, treatment of adrenal gland tumor are explained in detail.
Advertisement
To help solve this problem, researchers developed a simple saliva test that uses a smartphone and an attached device that inexpensively feeds the results of a saliva test into the smart phone. An app then quantifies and interprets the results of a salivary cortisol assay and gives results in five minutes at the point of care.

"The cortisol assay is similar in design to a home pregnancy test and urine sample drug tests," says Dr. Ehrenkranz. "It's like having an endocrine specialist in your phone."

Dr. Ehrenkranz and his team will present findings of this new smartphone technology at the 16th International Congress of Endocrinology on Tuesday, June 24, at 9:45 AM, CDT, in Chicago.

The idea for creating an easy and inexpensive test for cortisol first came to Dr. Ehrenkranz in 2007, while he was visiting Mulago Hospital in Kampala, Uganda. He was shown a 60-year-old woman suffering from Addison's disease, which occurs when the adrenal glands produce too little cortisol.

In order to help in the diagnosis, Dr. Ehrenkranz suggested testing the woman's cortisol levels, but her physicians resisted. Due to their current procedures, they felt the test would take too long and be too costly ($50) for the patient to afford. After drawing her blood, physicians would need to send the blood sample to a lab in Nairobi, Kenya, and by the time they received the results, the patient would likely have died.

"After my experience at Mulago, I knew I needed to develop a test and technology that would fix this problem of testing cortisol levels," said Dr. Ehrenkranz. "It needed to be inexpensive and easy to do."

"What this means is when blood cortisol levels are too high, insulin will not lower blood sugar," said Dr. Ehrenkranz. "Elevations in cortisol decrease the effectiveness of insulin and other drugs used in the treatment of diabetes. Having the ability to easily and inexpensively measure cortisol levels is important in managing diabetes."

Smartphone Face  Can You Still Keep Your Chin Up?