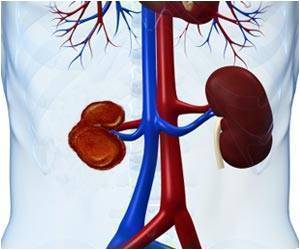 A protein kinase known as ROCK1 can intensify an important process called fission in the mitochondria, the power plants of cells, leading to diabetic kidney disease, researchers from Baylor College of Medicine found.

"We have shown the connection between ROCK1 and the progression to kidney disease through the effect of ROCK1 on the mitochondria," said "http://www.bcm.edu/medicine/nephrology/index.cfm?pmid=8715">Dr. Farhad R. Danesh, association professor of medicine - nephrology. "We have known that mitochondrial dysfunction plays a major role in the complications of diabetes, especially when affecting the eyes and kidneys. What we did not know was why people with diabetic complications develop mitochondrial dysfunction."


An estimated 15 million people in the United States have diabetes and 30 percent of them are at risk of developing kidney disease, one of its most serious complications. Such a major complication takes a human toll in suffering and an economic one in the cost of dialysis and kidney transplantation. Understanding the cellular changes that lead to kidney disease in diabetic patients might help researchers develop ways to prevent or delay such problems, said Danesh.

Dialysis is an artificial process for removing excess water and waste from the blood. Hemodialysis and peritoneal dialysis are the types of dialysis.
Advertisement
The mitochondria is known as the powerhouse of the cell, but it is also a dynamic organelle that plays important roles in cellular dynamics through processes known as mitochondrial fusion and fission. Danesh and his colleagues studied the effects of ROCK1 on the mitochondria in two mouse models of diabetes that lacked ROCK1 and another that had a form of the enzyme.

What they found was that when ROCK1 is activated, the mitochondria became fragmented in diabetic mice. This fragmentation leads to a process called apoptosis or programmed cell death.

Activation of ROCK1 means that another protein known as DRP-1 (dynamin-related protein 1) becomes activated and goes to the mitochondria, sparking fission. Mitochondrial fission is physiologically important in cell division, insuring that each resulting cells has mitochondria. However, pathological mitochondrial fission leads to cell death. The elucidation of this pathway can explain the road kidney cells follow to develop kidney disease in diabetes.

"These studies were done in mice, and we cannot be sure how they translate to humans," said Danesh. "However, we believe they do explain the metabolic pathway involved in diabetic kidney disease."
Source: Eurekalert

With more than one billion people affected, diabesity is the largest epidemic in the world today. Fortunately it can be reversed with lifestyle changes.
Advertisement
Advertisement

Globalization and changing lifestyles has made diabetes very common in developing countries so much so that ...