Diabetes is an independent risk factor for the development of heart failure in the community-dwelling population, reports a new study. The findings of the study are published in the journal Mayo Clinic Proceedings. 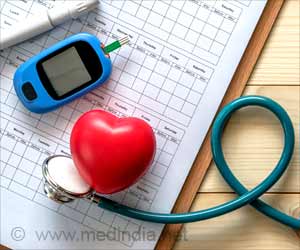 About 33% of people in the U.S. admitted to the hospital for heart failure also have diabetes. Heart failure may be the result of a co-condition, such as hypertension or coronary heart disease, but not always.


‘Heart problems are a common development for people with diabetes. ’

The study examines the idea of diabetic cardiomyopathy and heart failure from the effects of diabetes alone.

Utilizing the Rochester Epidemiology Project, researchers evaluated the long-term impact of diabetes on the development of heart failure, both with preserved ejection fraction a measurement of the percentage of blood leaving the heart with each contraction and reduced ejection fraction. They also looked at mortality in a community population, controlling for hypertension, coronary artery disease, and diastolic function. Horng Chen, M.D., a cardiologist at Mayo Clinic in Rochester, Minnesota, is the senior author of the study.

From an initial group of 2,042 residents of Olmsted County, 116 study participants with diabetes were matched 1:2 for age, hypertension, sex, coronary artery disease, and diastolic dysfunction to 232 participants without diabetes. Over the 10-year follow-up period, 21% of participants with diabetes developed heart failure, independent of other causes. In comparison, only 12% of patients without diabetes developed heart failure. Cardiac death, heart attack, and stroke were not statistically different in the study between the two groups.

The outcome data support the concept of a diabetic cardiomyopathy.

This research extends previous findings and demonstrates that even without a known cardiac structural abnormality and with a normal ejection fraction, diabetic patients are still at increased risk of developing heart failure as compared to their nondiabetic counterparts.

"The key takeaway is that diabetes mellitus alone is an independent risk factor for the development of heart failure," says Dr. Chen. "Our hope is that this study provides a strong foundation for further investigations into diabetes and heart failure. There is still much to learn and study in terms of this association and how to best diagnose and treat this condition."