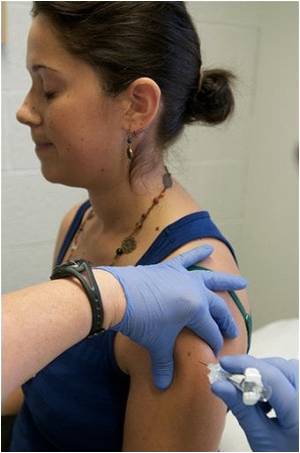 Vaccine manufacturers in India and other developing nations can produce a lower-cost HPV vaccine despite the complicated array of patent protections on the technology, according to an Indian-origin scientist at the Duke Institute for Genome Sciences and Policy.

At a cost of at least 300dollars for the three-dose regimen, the blockbuster HPV vaccines, including Gardasil from Merck and Cervarix from GlaxoSmithKline, are some of the most expensive ever introduced.

Subhashini Chandrasekharan, a researcher within the IGSP's Center for Genome Ethics, Law and Policy, said: "Three hundred dollars is a lot of money, and when you consider the disproportionate burden of HPV-induced cervical cancer on low-income countries, the potential for disparity becomes even more obvious. We wanted to address one of the barriers to producing a cheaper vaccine."


Other easy-to-make vaccines (e.g. polio) are manufactured in countries like India for costs less than 2dollars per dose, she explained.

But that may not work for newer vaccines as companies and others are increasingly seeking patent protections on their products in developing countries. That has only become possible in recent years since developing countries including India have signed on to World Trade Organization agreements designed to narrow the gaps in the way intellectual property rights are granted around the world.

The ongoing HPV vaccine trials in Andhra Pradesh and Gujarat have been stopped by the government following the death of six children.
Advertisement
Signatories of these IP agreements are now required to grant patents on the compositions of biomedical products as well as the processes used to make them. Until now, the absence of product patents had allowed developing country manufacturers to make cheaper generic drugs or vaccines without infringing patents as long as they used alternate methods to get there.

In this study, the researchers gathered and analysed all of the HPV vaccine-related patents that have so far been granted in the U.S. and internationally. That IP landscape is complex, with at least 81 U.S. patents granted to date. The researchers focused their attention on India, where 19 of 86 international patent applications had been filed by the close of 2008.

India is of special interest because it bears nearly 25 percent of the global cervical cancer burden and is a main supplier of childhood vaccines to agencies like the World Health Organization. Its growing middle class is also a potentially large market for the sale of HPV vaccines, Chandrasekharan said.

The researchers' analysis suggests that vaccines that are identical in formulation or HPV strain coverage to those now on the market are not covered by patent claims granted in India. That would appear to leave the door open to production of "biosimilars" offering protection against the two HPV strains that account for nearly 70 percent of all HPV-induced cancer.

That's good news for the prospect of improving access to the HPV vaccine, but Chandrasekharan believes that circumstance is unlikely to hold for future vaccines, including second-generation HPV vaccines.

She said: "Some of the enabling technologies were patented in the 1990s before companies had begun seeking patents in vaccine-making countries like India. The fact that a number of HPV vaccine patents have been filed in India as well as other developing countries suggests a new trend."

According to Chandrasekharan, universities and non-profits - important gatekeepers for the HPV vaccine and many other biotechnologies - should pay close attention.

She said: "Even if patents don't appear to be a barrier to the production of low-cost vaccines in the case of HPV, things are changing. The universities who often develop these technologies need to think carefully about what they are going to do with their IP. By participating in technology transfer partnerships and adopting favorable IP management practices, universities can expedite access to new generations of life-saving vaccines and increase their public health impact around the world."

She and her colleagues specifically recommend that universities and other non-profits seek to preserve options for vaccine manufacturers in developing countries.

The team, including collaborators Swathi Padmanabhan, Tahir Amin, Bhaven Sampat and Robert Cook-Deegan, said their findings should not be taken as legal advice, but as a starting point for legal analysis by interested parties.

The research appears in Nature Biotechnology.

Study Proves That Girls Are Aware of HPV Vaccine's Benefits