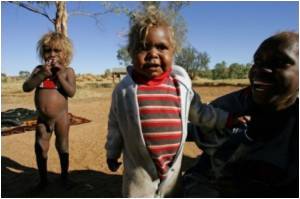 The Australian government is making a determined effort to improve health of aboriginals and their living conditions.

There are fewer than 200 notifications of infectious syphilis a year reported from mostly remote Aboriginal communities.


"Now is the right time to achieve this target. It's the right public health measure to be striving towards," says the principal author of the new strategy, James Ward, program head of the Aboriginal and Torres Strait Islander Health Program at University of NewSouth Wales's National Centre in HIV Epidemiology and Clinical Research.
Advertisement
The strategy includes approaches to reducing morbidity and mortality related to blood-borne viruses and sexually transmitted infections, including gonorrhoea, Chlamydia, HIV and viral hepatitis.

There are four priority areas of the new strategy including annual testing, treatment and follow-up for bacterial STIs of sexually active youth; increased efforts in the primary prevention to reduce the numbers of new cases of HIV and viral hepatitis among those who inject drugs; and competent, supported health workforces across all jurisdictions.

The strategy is one of a suite of five that aim to reduce the transmission of STIs and blood-borne viruses in Australia from 2010-2013. They are available through the Department of Health

The government will also spend $550,000 to help Indigenous men's groups stop violence in their communities.

The grant will be shared among seven different groups across the country.

Indigenous Health Minister Warren Snowdon says it is vital that Aboriginal leaders take the initiative to enforce the message that violence is unacceptable.

"Groups of Aboriginal and Torres Straight Islander men, either individually or in communities, are saying enough's enough," he said.

"We've got to actually change the way we're seen, we've got to show people we are in fact responsible leaders, responsible fathers, partners, brothers and grandfathers, and that's what they're doing and all power to them."