Destitute Children in DR.Congo Turn to Acrobatics to Live Off the Roads 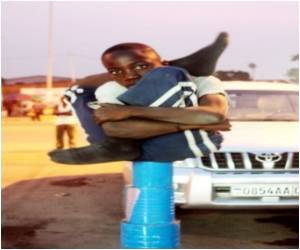 Jonas, 12, finishes his performance balancing on a tall tower of large jam tins, his arms stretched out and his feet wrapped over his head.

"This pose is called 'the end of the evening'," announces his assistant, 11-year-old Richard, moving into the crowd of amazed onlookers on a shabby Kinshasa street to collect a few Congolese francs.

In the hustle of the Democratic Republic of Congo's capital, these boys are among about 10 groups of child contortionists who support themselves and their families through a startling routine of twists and tricks.


"They are athletes of a top level," said Guy Nkita, technical director of the Congolese Federation of Athletics.

Several days a week, Jonas and Richard set out after school with their tin cans under their arms and trawl the bustling city of 10 million people looking for a willing audience at open-air restaurants and other relaxed places.
Advertisement
"We spot good people by their cars parked nearby, or how they are dressed or even how they look -- and that is where we work," says barefoot Jonas, who wears only trousers.

"One day, a papa (elderly man), gave us 100 dollars because he was so happy," adds Richard, smiling.

They use the money to support their families and pay for their schooling, while several thousand other children from destitute families spend their days begging in the streets or looking for something to eat.

Between 15,000 and 20,000 children live on the streets of Kinshasa, and between 40,000 and 50,000 across this country of 68 million people, according to non government organisation estimates.

Richard is already thinking of the future. "For three years I have been performing acrobatics in the road. My big brother taught me. He told me it would help me and we could even go to Europe because of it," he says.

He jumps up from the ground and, with quick precision, wraps one leg around his neck, the other straight, planted in the ground.

"This is the 'resting gun'," Jonas tells a fresh batch of spectators taken aback by the surprising contortions.

Despite their talent, these young acrobats have had no formal training. In the former Zaire, there are no gymnasiums thanks to a history of ethnic strife, war and corruption has saddled the country with a humanitarian crisis and economic woes despite its rich mineral resources.

Yet "these children have shown us they are even capable of performing a routine in a circus," said Nkita of the Athletics Federation. "If we take charge of them, they could carry out performances both on the local level and the international one.

"There are normally clubs for this, but in the Congo the gymnastics federation exists only in name," he said. "It is not operational."

Polio Threatens Destitute Afghanistan, Many Children Still Not Vaccinated
In the poorest region of one of the world's most destitute countries, Gulbadan Halifazada lives in ....

Economic Woes Send Destitute and Desperate Icelanders on Exile
Anna Margret Bjoernsdottir is one among the many Icelanders forced to leave her once wealthy ......