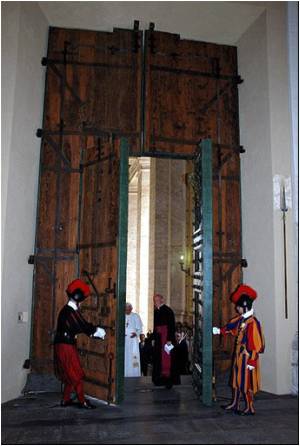 Despite being 76 and missing part of a lung, Pope Francis appears to be in good health and is ready to launch into a demanding papacy which will include trips across the world to meet with the faithful.

His predecessor Benedict XVI's resignation for age reasons at 85 years old sparked widespread calls for cardinals to elect a younger and more robust pope to the helm of the Church, preferably one with no previous health issues.

Pope Francis is only two years younger than Benedict was upon his election, but he has already revealed himself an active figure, leaping to his feet to greet cardinals in a solemn ceremony on Friday rather than reposing on the papal chair.


The Vatican confirmed on Thursday that the former Cardinal Jorge Mario Bergoglio of Argentina had part of his lung removed as a boy, but said he was in good health.
Advertisement
"Many, many years ago he had an operation in which part of a lung was removed," Vatican spokesman Federico Lombardi told reporters the day after Francis' historic election.

"Those who know him have always seen him in good health," Lombardi said, adding: "This is not a handicap in his life."

A 2010 biography based on interviews with the then Buenos Aires archbishop revealed that the young Bergoglio had the operation after suffering from an infection and took months to recover.

"I remember the moment when, with a raging fever, I hugged my mother and said: 'Tell me what is happening!'" he is quoted as saying.

"She didn't know what to say, because the doctors were perplexed," he said.

As a young man Bergoglio had hoped to work as a missionary in Japan but was turned down over fears he was not strong enough or his health could deteriorate, Francesca Ambrogetti and Sergio Rubin wrote in "The Jesuit".

But experts say the lack of part of a lung should not cause Francis trouble.

"People can live normal lives with part of a lung missing, it doesn't change anything. They just have a bit less in reserve. They can swim, take a plane, without problems," said French lung specialist Bertrand Dautzenberg.

Colleague Yves Martinet said: "If the remaining lung and a half remain healthy he will have no problems living a normal life for someone of his age."

According to Argentina's La Nacion daily, in 2007 Bergoglio suffered an inflammation of the sciatic nerve that prevented him from travelling to Rome to take part in an important ceremony in which Benedict appointed new cardinals.

The former Jesuit priest is known at home for using public transport and riding a bicycle, and while his diary is not yet known, he is likely to be heading off to Brazil in July for a gruelling Catholic World Youth Day event.

While Francis walks with a limp -- and tripped over his papal robes while rushing down steps at a mass on Friday -- observers say he seems robust.

"At first glance he cuts a grandfatherly figure, but he has a powerful presence, he seems a strong, solid man. It's a stark contrast from Benedict," said Robert Sirico, head of the US-based Aston religious think tank.

The historic decision could set a precedent for future popes who feel they cannot carry on, or wish to avoid the long and highly public decline of Benedict's predecessor John Paul II, unable to speak at the end of his reign.

The Polish pope, just 58 when he was elected in 1978, died aged 84 ravaged by Parkinson's disease.

Rather than considering retiring, John Paul II chose to soldier on, turning his visible personal suffering into a way of sharing that of millions of others -- a metaphor for bearing the cross.

For his part, Francis said he realised the spiritual significance of pain when the nun who had prepared him for his first communion came to visit him in hospital after his lung operation, according to "The Jesuit".

"She said something which left a big impression on me and brought me great peace. She said: 'You are imitating Jesus'," he told Ambrogetti and Rubin.

"Pain is not a virtue in itself, but the way we live with it can be virtuous. It makes us human" and helps us recognise Christ's humanity, he said.

Pope Francis Wants Church to be an Institution of the Poor and for the Poor
In his first remarks since being elected as the leader of more than 1.2 billion Catholics, Pope ......

Global Outlook Heralded by Jesuit Pope
Pope Francis, the first Jesuit pontiff, will have a global outlook, experts have said....