Despite Feeling Full, 4 in 5 Britons Carry on Eating 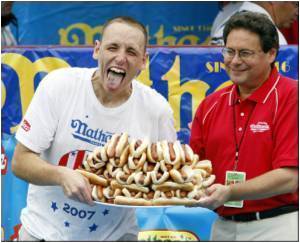 Most Britons continue to eat even if they are feeling full.

A UK survey has found that four in five Britons keep eating even after they are full, and more than 50 pc women end up eating as much as their husbands or boyfriends.

The term ''Bulimia'' refers to episodes of uncontrolled excessive eating, known as "binges," followed by self-induced vomiting or purgation.
Advertisement

Men, on the other hand, blame women for feeding them more than they can eat.


Around nine in ten Britons say they were told by their parents to clean their plates, the survey by diet firm Lighter Life found.

Up to 71 per cent say they would buy the coffee the next size up from their usual choice or 'meal deal' including crisps or a bar of chocolate with the sandwich if it was just a few pence more.

Are you a Health Food Junkie? Are you obsessed with what you eat all the time? You may be a victim of a condition called Orthorexia Nervosa.
Advertisement
"The research highlights how cheap food, a lack of awareness of appropriate portion size and junk food promotions are tempting British people to over-eat," The Daily Mail quoted Mandy Cassidy, psychotherapist, as saying.

And increasing portions coupled with cheap deals is not helping either.

"Obesity continues to be a significant issue for many individuals and is set to cost the NHS significant amounts of money," Professor Iain Broom said.

"In extreme situations, by choosing the wrong foods in the wrong quantities it can lead to a dramatic reduction in life expectancy," he added.