Design for Titanic II to be Unveiled 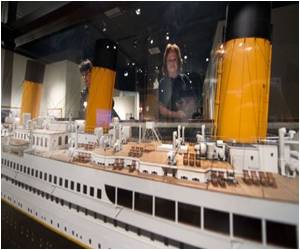 Australian billionaire Clive Palmer to unveil the design and plans for his ambitious Titanic II project in New York.

The flamboyant Palmer, who announced plans in April to construct the replica Titanic with exactly the same dimensions as its ill-fated predecessor, will hold a gala dinner on December 4 on the retired aircraft carrier USS Intrepid.

Titanic II To be Built by Australian Billionaire

Clive Palmer, one of Australia's richest men, has revealed intention for a 21st century version of the Titanic to be built in China, with her maiden voyage from England to New York set for 2016.
Advertisement

Those attending will include the former US president's daughter, his sister Jean Kennedy Smith and New York Senator Ruth Hassell-Thompson along with leading US business leaders, Palmer said.


They will be treated to a dinner from the same menu as Titanic passengers on the day it sank on April 12, 1912.

"It will be a chance for the business community of the United States and indeed the world to see the wonderful progress that's been made on our Titanic II project," Palmer said.

A restaurant in New York is recreating the menu offered to first class passengers on the ill-fated Titanic. And at 10 courses, it is taken that the menu could practically sink a ship by itself.
Advertisement
"Since we announced our plan in April we've had a huge amount of interest, particularly from people wanting to know how they can secure a booking for the maiden voyage, along with commercial sponsors."

The first voyage remains set for 2016, with the boat due to sail from China, where it will be built, to Southampton in England ahead of her maiden passenger journey to New York.

It will have 840 rooms and nine decks and retain the first, second and third-class divisions of the original.

Palmer extended an invitation for James Cameron to sail on the ship, saying the Titanic director had complained there were no Titanic-related experiences left for him.

"Well James, this is something you can do," he said.

The original Titanic, which was built in Belfast, sank on its first trip from Southampton to New York, killing more than 1,500 passengers and crew.

At sea and on land wreaths were cast and to remember the 1500 people who died when the Titanic sunk a century ago.
Advertisement
<< Anti-arrhythmic Drug Reduces Stiffness Caused by Muscle Dis...
Immune System Boosts Regeneration of Peripheral Nerves >>