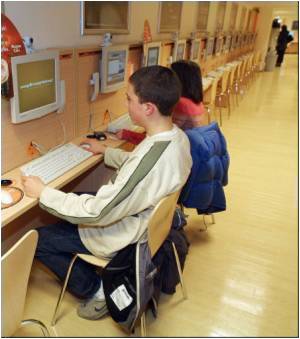 Internet addicition doubles the risk of depression in teenagers when compared to more controlled surfing, states a study.

For the study, published in the Archives of Pediatric and Adolescent Medicine, 1,041 teens from Guangzhou in southeastern China completed a questionnaire to identify whether they used the Internet in a pathological way, and were assessed for anxiety and depression.


Nine months later, the teens' psychological states were reassessed, and the researchers found that students who used the Internet uncontrollably or unreasonably were around two-and-a-half times as likely as normal Web users to develop depression.

Online Depression Screening Test tells if you have mild or chronic depression based on your depression symptoms. Learn how to deal with depression by using this self-assessment calculator.
Advertisement
Even when the stress of the teens' studies was factored into the equation, the Web-addicted teens were still one and a half times more likely to feel depressed at the nine-month follow-up than kids who used the Internet in a controlled way.

"This result suggests that young people who are initially free of mental health problems but use the Internet pathologically could develop depression as a consequence," study authors Lawrence Lam of the School of Medicine in Sydney, Australia, and Zi Wen-Peng of the Chinese Education Ministry said.

Pathological Internet use has been identified as a problematic behavior with signs and symptoms similar to those of other addictions, according to background information in the study.

Other studies have found that it is usually teenage boys who pathologically use the Internet, but the authors caution that the numbers of girls who show addictive Internet behavior is on the rise.

One warning sign of pathological Internet use: teens who were found in the study to be addicted to the Internet were more likely to use it for entertainment than for studying or gathering information, Lam and Zi found.

Then again, entertainment was the most common use of the Internet among the teens in the study, whose average age was 15.

The researchers suggest screening teens in their high schools to identify youngsters who are at-risk for becoming Internet addicts and possibly depressed because of their pathological behavior.

Internet addiction is turning into a clinical disorder, with more and more people visiting hospitals to curb the time they spend on the web, says a leading psychiatrist.
Advertisement
<< Patient's Own Heart Valve is Best Replacement
Claim of Cloned Cow Milk on Sale Being Probed >>