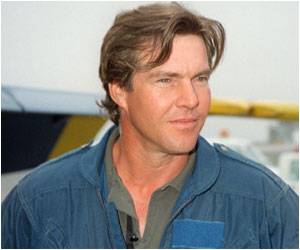 Dennis Quaid made a confession recently about his cocaine addiction. Apparently, it was during the early 1970's when the actor had just moved to Hollywood and was working hard to make a mark.

Amid all the struggle and as a way to cope with the many changes in his life, he began using cocaine and continued to use it till the late 80's.

A Settlement of $750,000 Made to Dennis Quaid Following Medication Overdose

The case of Medication overdose of the newborn twins of Hollywood actor Dennis Quaid and wife has been finally settled for 750,000 dollars with the Los Angeles hospital which was responsible for the error.
Advertisement

The 57 year old actor is remorseful about his behavior and says that he took to drugs due to the dynamic changes that were happening in his life.


"My greatest mistake was being addicted to cocaine. I started after I left college and came to Los Angeles in 1974. It was very casual at first. That's what people were doing when they were at parties ... Coming from where I came from - from Houston into Hollywood - and all of a sudden this success starts happening to you, I just didn't know how to handle that. Doing blow just contributed to me not being able to handle the fame", Quaid said.