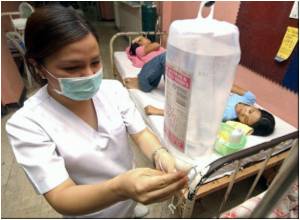 Researchers at the La Jolla Institute for Allergy and Immunology has found surprising evidence in a new study, that suggests the need for a revamped approach to dengue vaccine design.

The finding runs counter to current scientific understanding of the key cells that need to be induced to develop a successful dengue vaccine.

La Jolla Institute scientist Alessandro Sette, Dr.Biol.Sci., and his team found that T cells, which are key disease-fighting cells of the immune system, play an important protective role in controlling dengue virus infection, rather than creating an aberrant response that can ultimately worsen the disease as is the prevailing belief in the scientific community.


"The current thinking in the field is that the goal of a dengue vaccine should be the induction of antibodies and not T cells. But our results suggest that both cell types are needed to produce a strong immune response against dengue infection," said Dr. Sette, an internationally recognized vaccine biologist and director of the Institute's Center for Infectious Disease.
Advertisement
Major efforts are underway to create a first-ever vaccine, but have been hampered by the existence of the four different dengue virus strains.

People who get the severest forms of the disease are those infected by one dengue strain that later get re-infected by a different strain of the virus. In contrast to most viral infections where T cells are considered a normal part of the body's protective response, many scientists in the dengue field have theorized that T cells raised against an individual's first dengue infection dominate the body's immune reaction upon infection with a second dengue strain and mount an altered immune response.

This phenomenon termed "original antigenic sin" was believed to result in the T cells playing a pathogenic role during a subsequent dengue infection, causing some people to get more seriously ill. Dr. Sette said his findings do not support this theory.

In the study, researchers analyzed blood samples from 250 people in Sri Lanka, an island in the Indian Ocean, where dengue virus is endemic, screening the blood for exposure to all four dengue virus serotypes.

The researchers found that the participant's T cells recognized and responded to all dengue virus proteins and also identified the specific virus pieces that trigger the strongest T cell attack.

"People knew that some of the virus proteins were targeted by T cells, but we have created the most comprehensive picture to date, which could be very useful in creating a vaccine or treatment," said Daniela Weiskopf, Ph.D., who works with Dr. Sette.

The researchers also showed that genetic differences impact how people will react to dengue infection.

These findings further confirmed his belief of the T cell's protective role in dengue infection.

The finding was recently published in the journal Proceedings of the National Academy of Sciences.