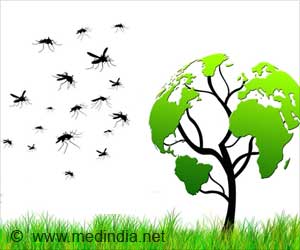 Releasing mosquitoes infected with a type of bacteria could wipe out the spread of dengue, thereby reducing global dengue cases by 90 percent, reports a new study.

This is the finding of a team of international scientists, led by Imperial College London, and including researchers from the University of California and University of Florida.


The Imperial team, based at J-IDEA, the Abdul Latif Jameel Institute for Disease and Emergency Analytics, created the first ever global map of dengue transmission intensity - which is a measure of how easily dengue is transmitted from person to person.


Using this map, the researchers predicted the global effectiveness of two interventions to combat dengue - vaccination and the release of 'infected' mosquitoes unable to transmit the virus between people.

Scientists infect mosquitoes in the laboratory with a type of naturally-occurring bacteria called Wolbachia, which prevents the virus replicating in the insect. In carefully-controlled trials, releasing these modified mosquitoes in areas heavily affected by dengue has been linked to a 70 per cent reduction in cases, though scientists caution this has to be confirmed in larger trials.

The study was published in the journal Science Translational Medicine, and funded by the Medical Research Council, National Institute for Health Research, the National Institute of General Medical Sciences, and the Department for International Development.

The new map is online and freely-available.

Dr Lorenzo Cattarino, lead author of the research from the MRC Centre for Global Infectious Disease Analysis, said: "Dengue is a leading cause of illness and death among children across the globe. Our research not only produces the first world map of dengue transmission, but can act as a tool to inform the World Health Organisation, local governments and policy makers on the effectiveness of prevention strategies, such as the release of Wolbachia-infected mosquitoes and vaccination programmes."

Dengue is a viral infection that infects over 100 million people each year. According to the latest estimates, around half of the world's population are thought to be at risk. The virus is spread by mosquitoes, and causes fever, headache, muscle and joint pain. In some cases, it can lead to a life-threatening condition called haemorrhagic fever which is a leading cause of death and serious illness among children in some Asian and Latin American countries.

There is no specific treatment for the disease, and prevention centres around avoiding mosquito bites - for instance using insecticides and reducing areas of standing water where the insects can breed, such as plastic containers.

However two methods of preventing infections have recently emerged that show promise of combatting the disease. A vaccine is now licensed for use against dengue, which works by reducing the intensity of subsequent dengue infections. There are four different types of dengue and therefore people can catch the disease four times. However, the vaccine can only be used in people previously infected with dengue (and thus requires people to be tested for dengue first). This is because the vaccine may prime a person's immune system to 'over-react' to a subsequent dengue infection if they haven't encountered the virus before, making the disease more severe.

Another method of prevention is disabling mosquitoes' ability to transmit the virus, by infecting them with the bacteria Wolbachia.

This bacteria is found naturally in around 60 per cent of insect species, including some mosquitoes, butterflies and moths.

Previous laboratory research has shown mosquitoes infected with Wolbachia do not transmit dengue, as the bacteria stops the virus replicating inside the insect.

In carefully controlled trials, scientists are now purposefully infecting the mosquito species that carry dengue - called Aedes aegypti - with Wolbachia, and releasing them into areas infected with dengue.

The trials suggest the bacteria does not pose a threat to animals or people in the areas where the mosquitoes are released.

Using data from these laboratory and mathematical modeling studies, the scientists behind the latest study used their map to predict this approach could eliminate nearly all dengue cases worldwide.

They also modeled the effectiveness of the Sanofi Pasteur dengue vaccine if used in all areas affected by dengue, and found the number of dengue cases could be reduced by up to 30 per cent. This is because the vaccine reduces the probability of becoming severely ill, rather than virus transmission.

The team highlight caveats in their study. The predictions assume the effectiveness of the mosquitoes in small-scale trials will be replicated on a global scale, and that the diagnostic test for dengue screening, which is recommended before the vaccine can be administered, is 95 per cent accurate. The researchers add that the two interventions were modelled separately.

Professor Neil Ferguson, co-lead author of the research, and head of Imperial's Department of Infectious Disease Epidemiology said: "Until now, gauging the effectiveness of control strategies for dengue, such as vaccine and Wolbachia-infected mosquitoes, has been limited by the lack of data on transmission across large geographical regions. The creation of this freely available global map of transmission, and the likely impact of control measures, will help identify strategies to reduce the number of people affected by the disease. The cost-effectiveness of these strategies can also be assessed, which is particularly important when most areas affected by dengue are in lower income nations."