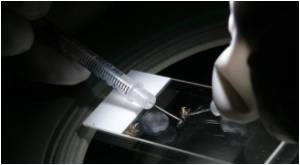 A part of the immune system that is involved in getting rid of dengue viruses has been identified by scientists.

Worldwide, dengue fever strikes roughly 50 million people every year and takes the lives of thousands, but specific therapies or a vaccine for this mosquito-borne illness remain unavailable.


Many scientists who study the disease have been searching for ways to boost the human immune response to dengue so that it does not gain a foothold in the body.

MBL recognizes sugar molecules present on the outsides of many different kinds of viruses and bacteria. When it finds these sugars, MBL activates the complement system, which targets foreign materials in the body for destruction in any of a number of cruel ways. Scientists have known that the complement system takes a hit during dengue infection, but until now no one knew that it also plays a role in getting rid of dengue viruses.

"Before, people thought the complement system was involved primarily in pathogenesis," said Sujan Shresta, an Associate Professor at the La Jolla Institute for Allergy and Immunology, who reviewed the paper and was not involved in the work.

"This paper is the first to look at the role of the complement system in the context of protection from the dengue virus."

Shresta asserted that this is an important discovery in terms of human health because different people naturally make different amounts of MBL.

This finding suggests that people with high MBL levels in their blood could well be better at fighting dengue infection.his is a clue that could help scientists create therapies for the disease.

"You could develop antivirals that work through a similar mechanism," to deactivate dengue viruses."

She also said that vaccines could also be designed to activate this pathway, helping boost the normal functions of the immune system to fight off infection.

The study has been recently published in the online journal mBio

Q Fever takes its origin from word query and is caused by bacteria Coxiella burnetii that infects some ...
This site uses cookies to deliver our services.By using our site, you acknowledge that you have read and understand our Cookie Policy, Privacy Policy, and our Terms of Use  Ok, Got it. Close
×