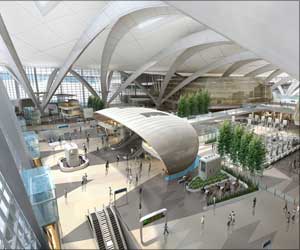 Indira Gandhi International Airport (IGIA) has been adjudged the world's best airport for the year 2014, under the category of handling 25 to 40 million passengers per annum.

Airports Council International (ACI) presented the Airport Service Quality (ASQ) award to IGIA at a ceremony of the ACI Annual General Assembly on the 28th of last month in Jordan.

"We are honored to represent an Indian airport at a highly acclaimed international forum as ACI. Our IGI Airport partners and employees have consistently delivered a memorable and distinct experience to our customers, enabling us to achieve the coveted world number one position," said I. Prabhakara Rao, CEO of Delhi International Airport Pvt. Limited, which manages IGIA.


The Delhi airport scored 4.90 on a scale of 5 points measured by 300 members of the ACI ASQ benchmarking program.

The Airport Service Quality is the key to understanding how to increase passenger satisfaction and improve business performance.

As many as 40 million passengers used IGIA to reach 58 domestic and 62 international destinations in 2014-15.

During the period, the average flight movements were 885 per day while 696,000 metric tons of cargo was handled.

Wings for Autism Event Gives Children With Autism an Airport Experience
The program aims to expose children with autism to airport routines like conveyor belts carrying ......

Airport Screening Measures Upped in Sierra Leone as Lockdown Extended till January 17
The Ebola lock down is extended for another two weeks to intensify monitoring efforts by all ......