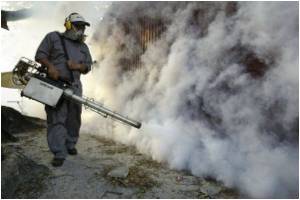 On top of construction chaos and corruption concerns, organisers of the Delhi Commonwealth Games are now grappling with a mosquito crisis at sporting venues and are even employing larvae-eating fish.

"We are taking all possible precautions against mosquitoes," a senior official from the Delhi event's organising committee told AFP Tuesday, asking not to be named. "But we are concerned."


An outbreak of mosquito-borne dengue fever in New Delhi has led 863 people to seek hospital care since July, according to an official tally, although the real number of infections is thought to be many times higher.

The October 3-14 sporting extravaganza, already mired in severe delays and corruption allegations, will bring together 8,000 athletes and officials from 71 nations and former territories of the old British empire.

Delhi Health Minister Kiran Walia on Monday told reporters she had ordered municipal authorities to spray anti-mosquito repellant "in and around" all the Games venues.

Media reports said organisers were also releasing larvae-eating fish in a pond built in the Games Village to protect participants from dengue, a viral infection transmitted to humans by female Aedes mosquitoes.

The disease causes a severe flu-like illness for most victims. One strain of it can cause internal bleeding.

A heavy monsoon and the Games construction sites across the city, where water has gathered in large pools, have led to heightened fears this year about mosquito-borne diseases. The insects breed in stagnant water.

"Due to a good monsoon and a rise in the Yamuna river water levels, high density (mosquito) breeding has been found in the Village and neighbouring areas," municipal health official V.K. Monga told The Times of India.

"To check this, we have introduced Gambusia fish in the water body near the training venue," he said.

A species of the Gambusia is known as the "mosquitofish" as it consumes the insect's larvae.

The Times said a Malaysian athlete participating in a Games test event in July had contracted dengue. 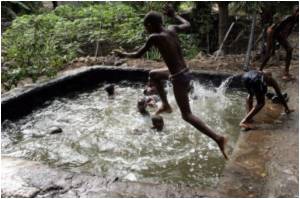