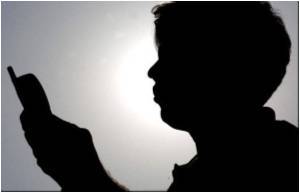 Residents in northwest Delhi's Shalimar Bagh are demanding the demolition of a mobile phone tower in the residential area, alleging that electromagnetic radiation from it poses a threat to their lives.

Shubash Kapoor, a resident of BC Block in Shalimar Bagh (East), told IANS that an Idea Cellular tower has been erected on the terrace of the third floor apartment where he lives as a tenant, with the permission of the landlord.

Scientists in the U.S. have issued a warning that radiation from controversial full-body airport scanners could lead to an increased risk of skin cancer - particularly
Advertisement

As telecom giants pay huge rents, house owners allow them to set up mobile phone towers. "Why can't they look at other alternatives for revenue? Why are they playing with the lives of residents?" Kapoor asked.


Sudha Sharma, an angry resident, said: "Why don't they (mobile network companies) understand residents' problems? We have to suffer because of mobile towers."

Greenpeace has said that radiation risk still looms large at the scrap market in New Delhi which was in the news recently following the death of a person after exposure to Cobalt-60 isotope.
Advertisement
"For over two years since the erection of the mobile tower, we have been suffering health problems like headache, fatigue and vomiting because of radiation. My six-year-old son is the worst-hit," she claimed.

"My doctor has confirmed these health issues are linked to radiation from the mobile tower," she added.

Sharma said their neighbour was suffering from cancer in the spinal cord, while another resident had complained of heart ailments.

According to the Municipal Corporation of Delhi (MCD), Delhi has over 5,000 mobile phone towers, of which 2,500 are illegally erected. Shockingly, most of these are in residential areas.

The MCD has threatened to seal illegal mobile phone towers because of possible health hazards. The Delhi High Court, which had earlier ordered the formation of a panel to study the health risks caused by mobile phone towers, put a stay on it and issued notice to the cellular operators association to file their responses by July 8.

"Despite the civic body's norms, many mobile towers are installed near residential colonies, schools, hospitals and dispensaries - all areas where they are not allowed," a civic body official told IANS.

"Exposure to electromagnetic waves generate heat in the body and high levels of radiation can even affect the enzyme system, cause mutation of DNA, protein structure and cell membranes," said Neha Kumar, an expert in industrial biotechnology, who has done research work on electromagnetic radiation.

"People who stay within the beam of the towers are the worst-hit. The continuous exposure to electromagnetic radiation could have a pernicious effect on our health," she said.

G.K. Jadhav, senior consultant in the oncology department of Apollo Hospital, said the worst-affected by mobile tower radiations are heart patients, particularly those who have pacemakers.

"We also attend to many brain tumour patients who are constantly exposed to electromagnetic radiation," Jadhav added.

However, chief co-operative affairs officer of Idea Cellular Rajat Mukarji denied the allegations, saying the towers installed by the company across the country are not harmful.

"The radiation levels are checked by a telecom engineering centre and they are at nominal levels; yet if the residents demand that the tower be removed, they should approach the company directly," he added.

The Telecom Regulatory Authority of India (TRAI), along with other central agencies, has proposed that the radiation exposure be limited to be 9.2 watts per square metre in India, though experts say this needs to be widely debated and analysed before implementation.

In some countries, the permissible limit in a radius between 50 and 300 metres varies from 0.001 to 0.24 watts per square metre.

"The level suggested in India is many times higher than that in the US, Switzerland, Poland and Russia," Kumar said.

S. Raghunath, senior scientist in the Central Electronics Engineering Research Institute (CEERI) at Pilani, however, said: "As a scientist, I cannot believe that mobile towers emit such radiation. Radiation from mobile phones used for long duration is higher than those from mobile towers."

Researchers have discovered that radiation exposure can alter the environment surrounding the cells so that future cells are more likely to become cancerous.
Advertisement
<< India to Focus on Health for Nine Percent Growth: Health Mi...
Rampant Prostitution Fuels Rapid Syphilis Spread in China >>