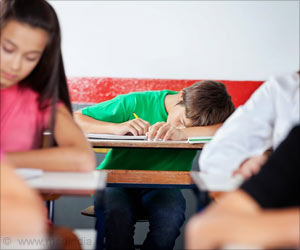 A new position statement from the American Academy of Sleep Medicine (AASM) asserts that the school day should begin at 8:30 a.m. or later for middle school and high school students.

In terms of males, only boys who had been involved in cyberbullying as both bully and victim felt more negatively about school and learning.
Advertisement
‘Insufficient sleep also is associated with an increased risk of motor vehicle accidents, which account for 35 percent of all deaths and 73 percent of deaths from unintentional injury in teenagers.’

"Early school start times make it difficult for adolescents to get sufficient sleep on school nights, and chronic sleep loss among teens is associated with a host of problems, including poor school performance, increased depressive symptoms, and motor vehicle accidents," said lead author and AASM Past President Dr. Nathaniel Watson. "Starting school at 8:30 a.m. or later gives teens a better opportunity to get the sufficient sleep they need to learn and function at their highest level."


The position statement is published in the April 15 issue of the Journal of Clinical Sleep Medicine.

Prevalence of Disability Among US Medical School Students

Studying the performance of medical students with disabilities requires a better understanding of the prevalence and categories of disabilities represented.
Advertisement
Studies show that short sleep in adolescents is associated with the following:

Insufficient sleep also is associated with an increased risk of motor vehicle accidents, which account for 35 percent of all deaths and 73 percent of deaths from unintentional injury in teenagers. Research suggests that crash rates decline by 16.5 percent following a school start time delay of 60 minutes.

AppyStore.in is committed to the development of young children, and demographic studies are important to understand the way parents and kids approach learning.
Advertisement
<< Understanding How Money Works Reduces Worry About Old Age
Heavy Drinking Directly Linked to Accidents >>