Decline in Quality of Air in World's Cities 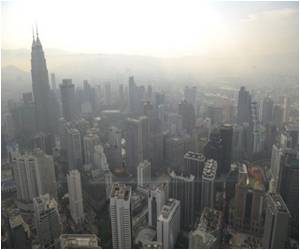 Air pollution levels are considered unsafe in most cities for its dwellers, and the situation is getting worse, suggest a World Health Organization report Wednesday.

"Globally, unfortunately, the situation of air pollution is deteriorating," Maria Neira, WHO director for public health, told reporters in Geneva as she presented an updated version of the UN health agency's Urban Air Quality database.

The database, covering 1,600 cities across 91 countries, revealed that only 12 percent of the world's urban residents enjoy air quality in line with WHO guidelines.


While a number of wealthy, developed nations are seeing improved air quality, cities in most low- and middle-income countries have seen pollution levels rise in recent years.
Advertisement
In fact, nearly half of the world's urban population is stuck breathing air with particle pollution levels that are at least two and a half times higher than what is considered safe, the WHO said.

Only cities in the developed world appear to be improving

"Too many urban centres today are so enveloped in dirty air that their skylines are invisible," lamented Flavia Bustreo, WHO assistant director general, pointing out that "not surprisingly, this air is dangerous to breathe."

WHO called for greater awareness of the health risks caused by air pollution, pointing to its report last March showing that outdoor air pollution from sources like coal heating fires and diesel engines had contributed to 3.7 million deaths worldwide in 2012.

The updated database provides an overview of concentrations of small and fine particulate pollution, which is particularly associated with high numbers of deaths from heart disease and stroke, as well as respiratory illnesses and cancers

Particulate matter (PM) measuring less than 10 microns, or 10 millionths of a metre, can lodge in the airways, causing respiratory problems.

More perilous still are smaller particles measuring under 2.5 microns across, which can be breathed deep into the lungs and can be so tiny that they even cross over into the bloodstream.

WHO says concentrations of PM10 should remain below 20 microgrammes per cubic metre, averaged out over the year, while the limit for PM2.5 is set at 10 microgrammes.

Yet most of the cities listed in the WHO database surpass such levels, with Rawalpindi in Pakistan for instance showing PM10 concentrations at more than 20 times and PM2.5 concentrations more than 10 times the recommended levels.

Neira stressed though that the database, which relies mainly on data gathered by the cities themselves, did not aim to rank the world's most polluted cities, pointing out that "some of the worst ones ... are not collecting data regularly."

The WHO report highlights the dramatic effect local policies can have on air quality, pointing for instance to Copenhagen and Bogota, where the air has become significantly healthier to breath thanks to policies aimed to get people to walk, take their bikes and public transportation.

"We cannot buy clean air in a bottle, but cities can adopt measures that will clean the air and save the lives of their people," Carols Dora at WHO's public health department said.