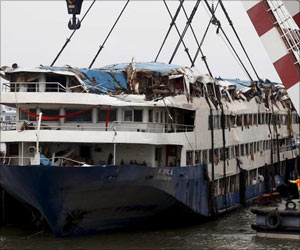 The death toll from the cruise ship disaster on China's Yangtze River has risen to 331, even as rescue teams continue to search for more bodies. The overturning of the Eastern Star ship has been attributed to sudden and severe winds by the authorities.

The surviving captain of the ship and his first engineer has been taken into police custody for questioning. Relatives of the passengers have questioned whether the ship should have continued its cruise after the storm started in a section of Hubei province and despite a weather warning earlier in the evening.

As their catamaran eases off from a jetty in Singapore, the guests lean over the side of the boat to catch the morning breeze.
Advertisement

Hu Kaihong, the vice director-general of the press bureau of the State Council Information Office, told a news conference that authorities had requested that river traffic and others along the river to alert them if they noticed any floating bodies.


Hu said authorities were increasing their efforts to search for the missing and had expanded the target area from the middle reaches of the Yangtze more than 1,000 kilometers (600 miles) downstream to Shanghai.

HongKong recently launched a $1.1 billion cruise terminal at its former airport site in an attempt to become Asia's hub for luxury liners
Advertisement
The boat had more than 450 people aboard, many of them elderly tourists, for a cruise from Nanjing to the southwestern city of Chongqing.

Tiber River in Rome Judged too Dirty for Tourist Cruises

Along Rome's Tiber River, tourist cruises have been suspended indefinitely for the first time since they began a decade ago because the waterway is judged too dirty.
Advertisement
Advertisement