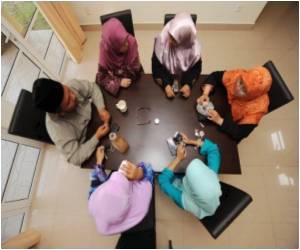 Career-oriented Muslim women are thrust into polygamous relationships due to lack of suitable men, reveals the Islamic Sharia Council.

According to the Council, some of them don't even have any qualms in becoming second or third wives to married men.

The charity, based in Britain, gives legal guidance to Muslims and has said it is receiving a high number of queries from women struggling to find suitable partners.


Many of the women have also said they would prefer to hold down high-profile jobs rather than look after their husbands.

Taking more than one wife is illegal in the UK but men marry again in a 'nikah' ceremony, allowing them to take up to four wives.

Iranian MPs on Monday amended a new family bill that would have made it easier for men to have multiple wives, amid protests by both top clerics and women's rights advocates, state-run
Advertisement
Mizan Raja, 35, who organises Muslim marriages around the world, said that he has had hundreds of calls in the past six months from women asking about becoming second wives.

"The demand for these relationships is led by the women, not the men. In one generation women have become educated, entrepreneurial and professional," the Daily Mail quoted Raja as saying.

"The Muslim community is struggling with this, how do you cope with women who wear trousers?

He revealed that many Muslim men just wanted a 'homemaker' and to come home to a clean house and a plate of food on the table.

He added the men didn't want the 'headache' of being in a relationship with a professional woman.

It is thought the Muslim women are also actively seeking out married men because they do not want the hassle of having to cook for their husbands after a hard day at work and are quite happy to get into part-time relationships.ne woman who spoke to the Sunday Times, and asked not to be named, had an affair with a married man after divorcing her first husband.

When he offered to leave his wife she preferred to become his second wife because she did not want him 'under her shoes 24/7'.

It is thought about 12,000 brides are brought to the UK by Muslim men.

The decline in available husbands has become such a problem it is now referred to as the 'Muslim spinster crisis'.

Outspoken opposition legislator Samina Khawar Hayat shook the House on Thursday when she called on the Punjab government to amend existing laws to allow men to marry for a second,
Advertisement
<< Smartphones Can Aid To Assess And Treat Schizophrenia
Drinking May Help Cut Stroke Risk In Women >>

Loram (2 mg) (Lorazepam) Turmeric Powder - Health Benefits, Uses & Side Effects The Essence of Yoga Color Blindness Calculator Calculate Ideal Weight for Infants Iron Intake Calculator Drug Side Effects Calculator Selfie Addiction Calculator Find a Hospital Sanatogen
This site uses cookies to deliver our services. By using our site, you acknowledge that you have read and understand our Cookie Policy, Privacy Policy, and our Terms of Use