Deaf-Mute Geeta Comes Back Home from Pakistan After 10 Years 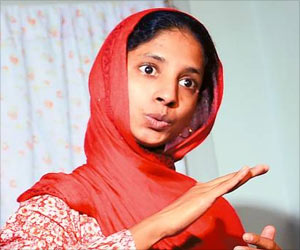 Geeta, a young deaf-mute Indian girl who remained stranded in Pakistan for over a decade, arrived in New Delhi on Monday, October 26, 2015, reported authorities.

Geeta, who is now in her early 20s, was about 11 years of age when she inadvertently crossed the border into Pakistan in 2003. She was spotted by the Pakistan Rangers in Lahore, and was handed over to the Edhi Foundation, a social welfare organization that has looked after her since then. Bilquis Edhi, who runs the Foundation, named her Geeta.


Two of Geeta's brothers, a sister-in-law, and Indian and Pakistani officials were present at the airport to receive her. The brothers were accompanied by their lawyer Mohammad Momin.

Deutsche Bank appointed Pakistani artist Imran Qureshi as the Artist of the Year.
Advertisement
Media in-charge at the Pakistan High Commission Manzoor Ali Memon said, "The commission would hold a reception for Geeta in the evening. Salman Khan-starer Hindi film 'Bajrangi Bhaijaan' had nothing to do with Geeta's homecoming as the process of bringing her back to India was launched much earlier in 2012. It's a message of love and affection between the two countries and has nothing to do with the movie."

External affairs ministry spokesperson Vikas Swarup said, "Geeta has already identified one family as possibly being that of her parents. We will be doing DNA testing to establish conclusive proof. If the DNA tests match, Geeta will be handed over to that family. If not, we have identified suitable institutions where she will be looked after."

The Essence of Yoga Loram (2 mg) (Lorazepam) Find a Hospital Indian Medical Journals Hearing Loss Calculator Post-Nasal Drip Noscaphene (Noscapine) Selfie Addiction Calculator Blood Pressure Calculator Pregnancy Confirmation Calculator
This site uses cookies to deliver our services. By using our site, you acknowledge that you have read and understand our Cookie Policy, Privacy Policy, and our Terms of Use