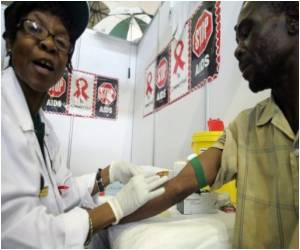 Researchers said that a deadly version of an intestinal germ has spread through Africa, helped by genetic mutation and HIV that weaken the immune system and expose the body to infection.

The finding comes in a genetic comparison of variants of Salmonella Typhimurium, one of the Salmonella family of stomach bugs.

In sub-Saharan Africa, a new form of the germ emerged in the southeast of the continent 52 years ago, followed by a second wave, which came out of central Africa 17 years later, the researchers said in a new study published by the journal Nature Genetics.


The variant is the cause of an enigmatic disease called invasive non-typhoidal salmonella (iNTS), which affects Africa far more than other continents.

South Africa's National Freedom Party (NFP) has said the sexual offence statistics in the country were still very high despite a small decline observed.
Advertisement
iNTS kills between 22 and 45 percent of those it infects and is suspected to be transmitted from human to human, previous research has found.

Outside Africa, Salmonella without this variant tend to cause acute diarrhoea but the death rate is less than one percent. And these infections typically occur from contaminated food, not from humans.

The answer, according to the study, lies in part from genes that Salmonella Typhimurium picked up in Africa which shield it from frontline antibiotics and help it survive in a human host.

The novel strain "is causing a previously unrecognised epidemic" across sub-Saharan Africa, said Chinyere Okoro of the Wellcome Trust Sanger Institute in Britain, who co-authored the study.

"Its genetic makeup is evolving into a more typhoid-like bacteria, able to efficiently spread around the human body."

Previous research into iNTS has noted the large numbers of Africans who are co-infected with HIV.

The new study says iNTS may in fact have been powerfully spread by HIV or by anaemia, malaria or malnutrition in children, all of which deplete the body's defences against a microbial invader.

"The HIV epidemic in sub-Saharan Africa is thought to have begun in a central region and underwent expansion eastwards, a strikingly similar dynamic to that observed for the second iNTS wave," said Okoro's colleague, Robert Kingsley.

"Our findings suggest the current epidemic of iNTS and its transmission across sub-Saharan Africa may have been potentiated by an increase in the critical population of susceptible immune-compromised people."

The second wave of iNTS began 35 years ago, possibly in the Congo Basin, and early in the event picked up a gene making it resistant to the antibiotic chloramphenicol, the study suggested.

The first documented cases of AIDS occurred in the United States 31 years ago.

Researchers, though, say HIV circulated in Africa for many years before the disease was uncovered.

It leapt the species barrier to humans from chimps, possibly through contact with bushmeat, around the turn of the century, according to some investigations.

Larger section of African American youth between 12 and 20 years of age are exposed to alcohol advertisements in magazines and on TV compared to other youths in the same age range.
Advertisement
<< Measurement Of Universe's 'Exit Door' Done For First Time
73 People Ill Due to Food Poisoning After Eating Prasad i... >>