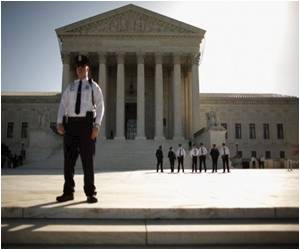 The US Supreme Court concluded the final hearing of the highly controversial Affordable Care Act on Wednesday, reports Nurse.com.

Two sets of arguments were presented on the legality of the case.

On Day 2 of the three-day long hearings in the Affordable Care Act case in the US Supreme Court, it was questioned whether the govt can actually force Americans to purchase insurance.
Advertisement

In the morning session, it was argued whether the Affordable Care Act would have to be overturned altogether, if the court ruled that individuals paying fines on not buying health insurance was unconstitutional.


The afternoon session focused on a discussion of whether it was permissible for the federal government to vastly expand Medicaid eligibility.

The lawyer for the 26 states and National Federation of Independent Business, which are challenging the ACA, said the individual mandate should be withdrawn.

Blue Cross Blue Shield, a US health insurance company, has been directed by the Obama administration to provide coverage to the same-sex spouse of a federal employee.
Advertisement
The lawyer for the Obama administration said key provisions, including rules barring insurance companies from denying coverage to those with pre-existing conditions, or imposing higher premiums on those with worse health histories, would be unrealistic without the mandate.

Unless almost everyone has to buy insurance, it was argued, people would wait until they fell sick or injured to obtain coverage. This would drive insurance premiums haywire.

However, the administration contended, the rest of the law should stand without the mandate.

There will be a private meeting of the judges on Friday to discuss the arguments and take a secret preliminary vote. Written opinions based on the vote will be released sometime before the court's 2011-12 term ends in late June.