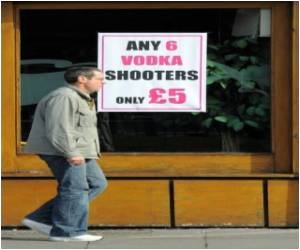 Prime Minister David Cameron has signalled support for local authorities to ban the cheap sale of alcohol, as Britain seeks to crack down on the country's notorious binge drinking culture.

The Conservative leader said plans to introduce a minimum price per unit of alcohol sold in shops and pubs in the northwest of England would be looked at "very sympathetically", in comments to a newspaper on Wednesday.

A unit is the standard measure used as a guideline for the consumption of alcoholic drinks in Britain, and is defined as 10 millilitres of pure alcohol.


Ten authorities in the Manchester area want to pass local laws to bring in minimum pricing in the hope of tackling binge drinking.

Cameron's comments mark the first time the government has come out in support of the measure, which has previously been backed by doctors and public health officials.

Alcohol and driving do not mix. Drunken driving is the cause of many deaths in the world.
Advertisement
Speaking to the Manchester Evening News newspaper, Cameron made clear that he did not want to introduce a national minimum price.

But he said: "I think the idea of the councils coming together on this is a good one and we will certainly look at it very sympathetically."

"Where I want to try and help is ending the deep discounting on alcohol," he added.

It is the latest sign that Britain's new Conservative-Liberal Democrat coalition government is seeking to put an end to Britons' heavy drinking habits, which turn city centres into no-go areas on Friday and Saturday nights.

Last month, reports said that the government was to put forward new proposals that would bring an end to 24-hour drinking laws, which have been blamed for a surge in alocohol-related violence.

Color Blindness Calculator Noscaphene (Noscapine) Sanatogen Drug Side Effects Calculator Diaphragmatic Hernia A-Z Drug Brands in India Selfie Addiction Calculator Sinopril (2mg) (Lacidipine) Accident and Trauma Care Vent Forte (Theophylline)
This site uses cookies to deliver our services.By using our site, you acknowledge that you have read and understand our Cookie Policy, Privacy Policy, and our Terms of Use  Ok, Got it. Close
×