Damascus Residents Retreat to Parks to Relax and Forget the War 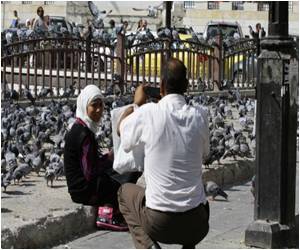 Families flock to the Arnus garden as night falls on Damascus, with its statue of former leader Hafez al-Assad, in an attempt to relax and forget the war.

"At home, I'm on edge and upset watching the news. I come here to breathe," Umm Sami, a portly smiley woman says from behind her small glasses, her hair tucked under a white veil as bombing echoes from the city's outskirts.

"When I see all these people, I'm not afraid any more," she adds, gesturing towards the plastic chairs and tables set up alongside vendors selling coffee, juice, candyfloss, corn and sweets -- all to the sound of popular Arabic music in a fairground atmosphere.


Once a place where people came for a quick stroll before the conflict began with the March 2011 uprising against President Bashar al-Assad, this green corner in the central Salhiye district has been transformed into an open-air cafe.
Advertisement
Residents come to relax and experience a bit of human warmth and normalcy, just a few kilometres (miles) from battles between regime forces and rebels.

In the past, they might have retreated to the greenery of Eastern Ghouta, a Damascus suburb that has now become infamous as one of the scenes of an alleged deadly chemical weapons attack on August 21.

But now, Damascus residents looking for some respite go to the city's public gardens. In Tishrin, Al-Jahez, Mazraa and Baramkeh districts, crowds of locals are protected in local parks by armed security men.

"I come here every day, and I'm reassured because the army is everywhere," says Roqayya al-Zayyat, with a big smile.

"This is where we feel most secure," adds Samar, at the park with her mother, pushing her daughters in a pushchair.

"It's a change of scenery, and it's cheaper than the cafes," she says.

"I work in tourism and travel. But nowadays it's just travel," he jokes bitterly.

Beefy Wassim, 33, puffs on a nargileh water pipe as children zip by on scooters, bicycles and skates, and couples walk hand-in-hand.

"We spend hours here to defy the war," he says.

But the bloody conflict is never far away, with a popular pro-regime song pounding the air: "The Syrian people in the streets are shouting 'We are your soldiers, oh Bashar!'"

The park is also a place for America-bashing.

Amir Najar recites poetry criticising US President Barack Obama, who said this weekend he would seek congressional approval for a military strike on Syria over the alleged chemical weapons attack that Washington blames on the regime.

"Miserable Obama, you submit yourself before Assad," he sings, to applause from the audience.

But behind their apparent confidence, many residents have sad stories to tell.

"I used to work in Jaramana (southeast of Damascus), but the terrorists destroyed our sweets factory," says Osama, who has been selling juice, coffee and tea for the past year.

Syria's regime used the terminology "terrorists" to refer to rebels.

While the city's gardens stay alive until late in the evening, along with a few shopping areas, the atmosphere of Damascus at night is markedly different from before the war.

At midnight its streets are deserted, even though most Arab capitals stay awake and alive into the small hours during the summer months.

Cars drive across Abbassid Square as quickly as possible, given its proximity to the battleground eastern district of Jubar.

And Bab Tuma in Old Damascus is now almost unrecognisable, transformed into a land of barracks with checkpoints and soldiers posted on the old city walls.

The dimly lit streets are sinister, even if some backgammon players and nargileh fanatics still gather at small cafes to indulge their passions.

But despite all the changes in the Syrian capital, and even with the looming threat of foreign intervention, Umm Sami remains an optimist.

"I hope that Damascus returns to how it was before," she says.

Children Among Over 1,000 Civilians Gassed to Death in Syria, Say Reports
In a suspected chemical weapons attack in Syria, a number of children were also slaughtered among .....

Syria's 6 Heritage Sites Listed as 'Endangered'
Six ancient sites in Syria have been added to the endangered World Heritage list by the UNESCO...

Measles Epidemic Sweeps Parts of Northern Syria
Doctors Without Borders said that an epidemic of measles is sweeping through parts of northern ......