D-Day Heads to Dine in at Landmark of French Resistance 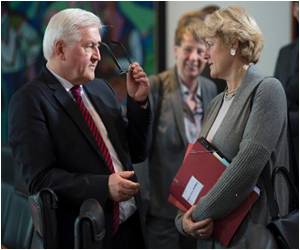 The chateau that played a celebrated role in French resistance to the Nazis will be the dine-in venue for the heads of state attending 70th anniversary of D-Day.

Queen Elizabeth II, US President Barack Obama and his Russian counterpart Vladimir Putin are among the dignitaries who will be treated to a locally-sourced meal produced by Michelin-starred chefs at the Chateau de Benouville.

The 18th-century edifice is situated just a few kilometres (miles) away from the landing beaches where the liberation of continental Europe began seven decades ago.


During the war, the chateau was used as a maternity hospital and its female director, Lea Vion, was famed for offering a refuge to fugitive allied airmen and local resistance activists, as well as relaying crucial intelligence on German forces to the allies.
Advertisement
Constructed between 1765 and 1785, the chateau passed into the ownership of local authorities in the 1920s, after which it was used as both a primary school and a maternity unit run mostly by nuns who provided a refuge for young unmarried mothers and orphans.

Vion became the director of the institution in 1935. Following the occupation of France in 1940, she became involved in the underground resistance to the Nazis, earning the nickname "the Countess."

The building's role made it the perfect place to hide escaped prisoners and allied airmen who found themselves stranded when their planes came down behind enemy lines, as well as weapons.

A radio transmitter used to relay messages to resistance operatives in the region and equipment for producing fake identity cards were also kept away from prying German eyes inside the hospital, its extensive grounds, cellars and outbuildings.

Miraculously, the chateau escaped any damage on D-Day itself, despite being only seven kilometres (four miles) away from some of the fiercest fighting at Sword Beach, and a similar distance from Caen, which was to be virtually razed during the ensuing Battle of Normandy.

The buildings subsequently fell into disrepair but they were restored in 1985 and two years later hosted a Franco-British summit involving then President Francois Mitterrand and British Prime Minister Margaret Thatcher.

Now it is regularly opened to the public for exhibitions.

A total of 20 heads of state and government and around 60 other guests will sit down for a lunch produced by five award-winning Normandy chefs.

The actual menu is a closely guarded secret but one of the chefs, Michel Bruneau, confided: "It will be all, or nearly all, Norman produce."