Cytosine Deamination Could be the Reason Behind Malignant Tumors

A genetic mechanism is more likely to drive mutations that can lead to cancer, revealed a research at Indiana University.

The study, published today in the Proceedings of the National Academy of Sciences, finds the enzyme APOBEC3G -- a known trigger for mutations that occur as benign tumor cells transform into cancerous malignancies that spread throughout the body -- appears to cause these harmful changes by mutating genes during the replication of DNA.


The research, conducted in the bacteria Escherichia coli, was supported in part by IU's $6.2 million grant to investigate bacterial evolution from the U.S. Army Research Office. Patricia Foster, the principal investigator on the grant and a professor in the IU Bloomington College of Arts and Sciences' Department of Biology, is senior author on the study.


The study also received support from the Wayne State University School of Medicine, whose researchers provided expertise on APOBEC3G and helped analyze the data. All experiments were carried out at IU.

"Many tumors accumulate mutations during their growth, which leads to the subsequent characteristics that permit metastasis," Foster said. "Based upon the results revealed in bacteria in our study, we believe that the APOBEC family of enzymes create some of these mutations specifically during the rapid growth of these tumors."

The results could have implications for personalized medicine, a growing movement to tailor treatments and therapies based upon individualized genetic information. For example, since it is possible to identify tumors potentially vulnerable to the enzyme by using current DNA sequencing technology, a physician treating these tumors might want to explore temporarily suppressing expression of this enzyme, she said.

An important organism for studying genes, E. coli allows scientists to observe genetic changes over thousands of generations in a relatively short time span. The results apply to humans as well as bacteria since the basic mechanisms of DNA replication are the same across all species.

Normally, the APOBEC family of enzymes plays an important role in the human immune system by driving changes in immune cells that aid in defense against viruses, possibly including the HIV/AIDS virus. But IU scientists found the harmful influence of the enzyme family arises from the complex way that two halves of every double-stranded DNA molecule must unravel to replicate during cellular division -- splitting into two temporarily single-stranded DNA chains thousands of "links" in length to serve as templates for the new copy.

These links are the four chemicals, or nucleobases, that comprise all DNA: cytosine, or C; guanine, or G; adenine, or A; and thymine, or T. As these paired chemicals are split in half to be copied, one of the two single-stranded bits of DNA -- known as the lagging strand template -- is highly vulnerable to genetic mutation, Foster said.

This "gap in the armor" occurs because the enzyme that builds a new string of DNA -- known as a DNA polymerase -- must repeatedly traverse the nucleobases in the lagging strand template thousands of times during the course of replication, stopping further down the chain from the base pair previously inserted on the past loop along the chemical chain. Each of these polymerase "hops" creates a long stretch of DNA that temporarily remains as a single strand.

The complex process -- driven by the fact that the two DNA strands are oriented in opposite directions and polymerases copy in only a single direction -- introduces more opportunities for errors in the lagging strand template compared to the continuous, step-by-step process that replicates the other half of the split strand of DNA, called the leading strand template.

"We're talking about thousands of bases exposed without a complimentary strand throughout the whole replication cycle," Foster said. "If I were going to design an organism, I would make two types of copying enzymes, one that could go each way. But that's not how it works; no organism has ever evolved a more efficient way to replicate DNA."

The mechanism by which the APOBEC family of enzymes drives mutation is cytosine deamination, in which a cytosine -- the "C" nucleobase -- transforms into uracil, one of the four bases in RNA that doesn't play a role in DNA replication. But the presence of uracil during DNA replication can cause an error when a thymine -- the "T" nucleobase -- replaces a cytosine. APOBEC enzymes specifically target the C's in single-stranded DNA for deamination.

The disruptive effect of the enzyme on genetic replication in the study was observed in a strain of E. coli whose ability to remove the dangerous uracils had been switched off. To conduct the experiment, Foster's lab observed the effect of APOBEC3G on approximately 50 identical lineages of E. coli over the course of nearly 100 days, with each day encompassing 20 to 30 bacterial generations.

Over time, a unique pattern of nucleotides was detected in the mutated DNA, a chain of three cytosine molecules, or C-C-C, the same genetic signature found in other studies of the enzyme family. And these mutations were four times more likely to be found on the lagging-strand template than on the leading-strand template.

"These results strongly suggest that these mutations occur as APOBEC3G attacks cytosines during DNA replication, while they're most exposed on the lagging strand template," Foster said. "This basic mechanism appears to be the same in bacteria and in human tumors cells."

Modeling the Effects of Cancer Mutations
Thousands of gene mutations linked with cancer has been revealed by sequencing the genomes of tumor cells.
READ MORE

Cancer Mutations Identified As Targets Of Melanoma Immunotherapy
The recognition of unique cancer mutations could be responsible for complete cancer regressions in metastatic melanoma patients treated with immunotherapy, a new approach has found
READ MORE

Virus-fighting Genes Linked to Cancer Mutations
New research has confirmed the role of a group of virus-fighting genes in the development of cancer.
READ MORE

Universe of Cancer Mutations Larger Than Expected
The universe of cancer mutations may be much larger than expected, a new study across cancer types revealed
READ MORE 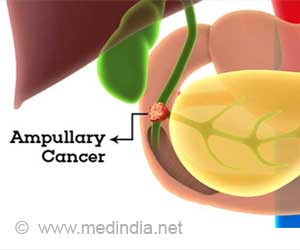 Ampullary Cancer
Ampullary cancer is a rare cancer of the ampulla of Vater that connects the common bile duct and pancreatic duct to the small intestine. Symptoms of ampullary cancer include jaundice, weight loss.
READ MORE