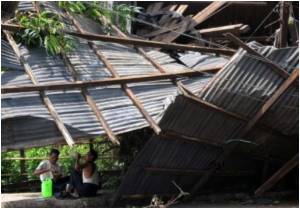 Countless have had to bear the burden of cyclone Thane in the coastal regions of Tamil Nadu which has left them impoverished by the calamity.

Hapless people were seen wandering on Saturday in search of shelter and food at various locations of cyclone hit areas in Tamil Nadu and Puducherry.

Survivors of Myanmar's cyclone are plagued by visions of their lost loved ones and fears of further disaster as they try to summon the energy to rebuild their lives, a medical aid
Advertisement

Cyclone Thane struck the coast of Cuddalore in Tamil Nadu on Friday, with heavy rains lashing several areas and causing extensive damage to the property.


At least 33 people were reported dead when the cyclone hit coast of south India near the former French colony of Puducherry, officials said.

A government doctor in Bangladesh warned that the southern part of the country was on the brink of an acute diarrhoea outbreak, days after a cyclone hit the region and neighbouring India.
Advertisement
Krishnamurthy, a resident of Cuddalore, said cyclone victims have not got food since yesterday.

"After the rain water entered into the villages, people, both men and women, fled to the safer places. And from yesterday night we have been literally starving, struggling to have a morsel of food," lamented Krishnamurthy.

Cyclone Thane hit southern Tamil Nadu on Friday with winds of up to 135 kmph and tidal surges of up to 5 feet.

About 6,000 coastal villagers were forced to seek safety in relief shelters.

Hundreds of people from fishing communities along north Tamil Nadu coast, and neighbouring Andhra Pradesh, had to move in to the schools, set up as relief centres until the weather system passed.

Fishermen have been advised not to venture out as the cyclone has ravaged the shores and the trends are still expected to prevail on the high seas.

The Regional Meteorological Observatory at Chennai informed that though the cyclone has weakened gradually, chances of heavy rainfall in the state still persist.

Trees were uprooted and roads damaged along a 40 kilometres stretch of coast that includes the township of Auroville, known for its avant-garde architecture and yoga activities.

The storm quickly lost strength over land and on Saturday morning and the weather office said it was only a now a depression that would bring some heavy rain across the south.