Cycle Rally in Simla to Campaign on Environment Conservation 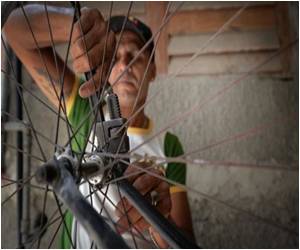 In the best of intentions many youth took part in a cycle rally to spread awareness on environment conservation among the masses.

Over 75 cyclists participated in the event and covered a distance of 22 kilometres.

Speaking to reporters, one of the organisers of the event, Sushil Tanwar, said, "These participants would become the brand ambassadors for the present and the future generation, who are spreading the message of environment conservation, a healthy lifestyle and energy conservation. So, we hope that this message would become a part in the normal routine of the people of Shimla.


He also pointed out that cycling as an effective cardio exercise that also tones large muscle groups.

The participants were excited to be part of the event.

More bicycle riding and other lifestyle changes are urgently needed to reduce climate-altering carbon emissions that are damaging Asia's health and could also threaten the economy, bicycles usage
Advertisement
"We need to save fuel. We think that (forests at) uphill and downhill (of the hilly regions) are very important for us. So, everyone should join us in this ride, and in the next ride more people will join us," Abhilaksh Kumar, a participant, said.

The event was categorised in two sections- uphill and downhill ride and the fun ride was organised by the Initiative for Cycle Enthusiasts (ICE) under the banner of Aashadeep, a social group.

It is a good thing to use the bicycle on the streets of New York City, but one must be aware of the risks , especially for those who do not wear helmets or have had too much to drink.
Advertisement
<< 'Stressed About Men' Spells Ruin to Cheryl Coles Appetite
Team GBs Top Secret to Gold Success is Hot Bikram Yoga >>