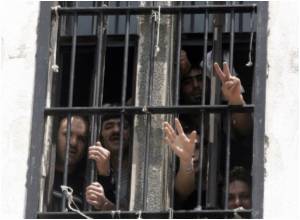 The comfy life within Britain's jails instigates some inmates get locked up again deliberately after being released, reveals the UK's prisons service chief.

In an astonishing attack on the country's prison system, Nick Hardwick, the Chief Inspector of Prisons, said jail is "a revolving door" for thousands of offenders.

According to sources, jailed Jack Tweed has been put in a single cell along with inmates on suicide watch to shield him from other prisoners looking to bully him.
Advertisement

He pointed out that many inmates were "sleeping their way through sentences" without being given the necessary skills or training to change their ways.


Hardwick also warned that prisons cannot afford Justice Secretary Ken Clarke's "rehabilitation revolution" without releasing thousands of criminals because of crippling 23 percent budget cuts, Express.co.uk reports.
Advertisement
Hardwick revealed offenders would breach their parole conditions so they could return to jail and smuggle drugs in at the same time.

He had actually witnessed a prisoner receive drugs from his visiting girlfriend as they kissed, while officers simply looked on.

According to the report, a record 87,393 people spent Christmas behind bars this year.

About half of all prisoners are thought to re-offend within a year of their release. Last year research found three in four criminals did not give up their life of crime.