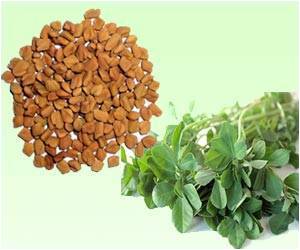 The key to fending off the cold virus could be an ingredient in your kitchen cabinet, often used to make curry.

For centuries, mothers have used fenugreek, which is rich in antioxidants, to stimulate the production of breast milk during pregnancy and following childbirth, reports the Telegraph.

Understanding the cause and mechanism of seasonal allergy can help in choosing the right treatment.
Advertisement

But now the herb has been hailed as an unlikely "fix-all elixir" thanks to its powerful antiviral properties.


Researchers found it may stave off viruses that cause sniffles and sore throats, helping to relieve the symptoms.

In a three-month period - between October and late December - 10 healthy volunteers consumed two portions of the herb per week.

Over-the-counter (OTC) drugs can be bought without a prescription. OTC allergy medications are for the allergy sufferer to choose the right over-the-counter drugs.
Advertisement
The same amount was consumed by another 10 volunteers with common cold symptoms for the same period.

The results appear to be conclusive, with volunteers reported immediate and sustained relief from symptoms of runny nose, cough, sneezing, sore throat, and tiredness.

Volunteers who were fit and healthy at the outset remained that way for the duration of the trial, despite usually coming down with a cold at least once in the same period.

The trial was conducted by the Anglo-Indian chef Gurpareet Bains, a leading nutritionist and the creator of the 'world's healthiest meal'.

A person afflicted with the common cold is most infectious three days after the start of infection. Find out more about the malady and about some simple home remedies to counter the problem from this quiz on cold.
Advertisement
<< Study Points to Effective Bedbug Control Methods
Radiation Therapy Effective Against AIDS-related Head and N... >>