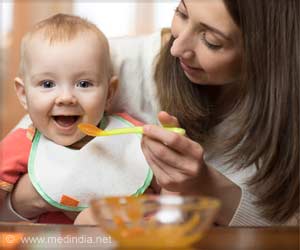 Standard feeding guides may lead to overfeeding in infants, reveals a new study. The findings of the study are published in the American Journal of Preventive Medicine.

Solid food feeding guides are produced by infant formula makers, large children's hospitals, and other infant health experts. They are meant to guide mothers and other caregivers in starting infants on solid food after initial exclusive milk and/or formula feeding.

Babies Who are Introduced to Solid Foods Early Sleep Better

Babies who are introduced to solid foods early tend to sleep longer and wake up less in the night, supports a new study.
Advertisement
‘Overfeeding an infant can lead to weight gain and related health problems later in life. ’
Read More..

The new study found evidence that recommendations in four feeding guides if followed from age 6 to 12 months, would likely result in overfed, overweight infants. "It is very important that children aren't overfed during infancy because we know that can lead to weight gain and related health problems later in life, yet the model used in our study showed that following current established guidelines could often lead to overfeeding of the infant," says study first author Marie Ferguson, MSPH, a research associate in the Department of International Health at the Bloomberg School.


The study was based on a model involving computer-simulated infants that were fed certain diets, and their resulting growth was recorded. The study also measured the computer-simulated infants' metabolic rates and activity levels, and documented body size and other attributes that were sampled from normal ranges and tracked day by day from age six months to 12 months. The simulation also modeled the fact that mothers normally adjust feeding amounts in response to infant weight gain or weight loss.

Infants are Being Fed Solid Foods Earlier Than Recommended

Newborn infants are being fed solid foods earlier than recommended, putting them at serious risk of chronic diseases.
Advertisement
Testing the impacts of these feeding guides with real infants in a clinical trial would be a complex undertaking, the authors note and would involve ethical issues given the risk of over- or under-feeding infants participating in such a trial.

The Virtual Infant computer-simulation model used for the study was developed by a team led by senior study author Bruce Y. Lee, MD, MBA, an associate professor in the Bloomberg School's Department of International Health and executive director of the Global Obesity Prevention Center.

"It is important to pay closer attention to what infants are getting fed and how parents are being advised. Overfeeding an infant can make it much tougher for him or her to maintain a healthy weight in the future."

The researchers first validated their model by feeding their virtual infants according to a standard reference guide on infant energy requirements. They found that the resulting growth of the virtual infants was essentially in line with growth curves published by the World Health Organization and other authorities.

The team then simulated feeding of their virtual infants from age 6 to 12 months according to guides published by the Children's Hospital of Philadelphia, Johns Hopkins Medical Institutions, Enfamil and Similac. For every one of these guides, the researchers ran four simulations. Each modeled 1,000 infants, assumed standard breastmilk intake and assumed solid food intake according to the guide, but included a different rule about caregiver adjustments to solid food portions.

Ferguson and her colleagues found, in their initial analysis, that following each of the four guides for just a few months would drive the average body mass index (BMI) for the virtual infants into the "overweight" category--above the 85th percentile for BMIs. This finding applied even for the scenario in which solid food portions were kept to the lowest 25 percent (quartile) of the guide's recommended range.

The solid food feeding guide that seemed to produce the healthiest results was the Similac guide. In the most favorable scenario, with feeding portions kept to the lowest quartile, following the Similac guidelines did not move infants into the overweight category until age ten months for girls and 11 months for boys.

Even when the team ran further simulations assuming that breastmilk portions were halved, all guides except Similac led to overweight BMIs between 9 and 11 months.

The results, Ferguson says, suggest that although current standard solid food guidelines may have been based on the best available evidence, that evidence may not have been good enough.

Obesity in Marmosets Linked to Early Introduction of Solid Foods

Babies who are introduced to solid food even as they are fed breast milk after 17 weeks of birth have a lower risk of developing food allergies.