Culex Mosquitoes are Not Carriers of Zika Virus 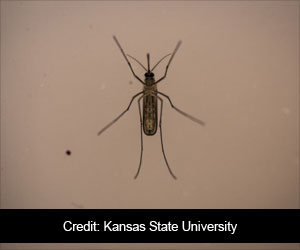 In the fight against Zika virus, a Biosecurity Research Institute has found that Culex mosquitoes do not transmit Zika virus. Researchers at Kansas State University studied Culex species mosquitoes from across the country, including Vero Beach in Florida, which is near Miami-Dade County where mosquitoes are spreading Zika virus.

The research, "Culex species mosquitoes and Zika virus," appears in the journal Vector-Borne and Zoonotic Diseases and involves researchers from Rutgers University, the University of Florida and the U.S. Department of Agriculture.

The findings are important for controlling Zika virus in Florida and preventing its spread to other parts of the country, said Dana Vanlandingham, lead author and assistant professor of virology at the College of Veterinary Medicine.


"It's very important to know that Culex mosquitoes are not able to transmit Zika," Vanlandingham said. "It enables people to target their control strategies so that they aren't wasting time and effort on a mosquito that isn't transmitting Zika virus."

Twelve new cases of the locally transmitted Zika virus infection have brought the total number in the city state to 381, authorities said on Monday.
Advertisement
It is the first Zika virus research publication from the Biosecurity Research Institute. Before this study, Culex mosquitoes' role in Zika virus was unclear. By studying Culex mosquitoes over a period of time, the researchers found that Zika virus did not multiply and instead disappeared in the species.

"This is great news," said Stephen Higgs, co-author, and director of the Biosecurity Research Institute. "We can check this particular group of mosquitoes off the list here in the U.S. and focus efforts of control on the mosquitoes that we know can infect, like Aedes aegypti and Aedes albopictus."

The Centers for Disease Control and Prevention has identified Aedes aegypti, or yellow fever mosquito, and Aedes albopictus, or Asian tiger mosquito, as two species that transmit Zika virus. Both mosquitoes are widely distributed in the U.S. and are present in Kansas.

Both Vanlandingham and Higgs emphasize the importance of personal responsibility in stopping the spread of Zika virus. Homeowners can get rid of small pools of water where mosquitoes breed and should use mosquito repellent as personal protection.

While a startup fund from the university's College of Veterinary Medicine provided funding for this Biosecurity Research Institute study, there is still a need for additional national funding to support research that stops Zika virus, said Higgs, who also has studied chikungunya, a mosquito-borne virus that has a similar transmission cycle to that of Zika virus.

"We thought that this research is so important with what is going on that we were able to use startup funding," Higgs said. "This research is basic research because we don't know some of the most fundamental information about mosquitoes. Applied research  such as vaccines and diagnostics  are obviously very important, but there is a need for funding basic research as well."

Rio Carnival Opens Under the Cloud of Growing Zika Fears

The impact of the mosquito-borne Zika virus will be modest, if $3.5 billion, or 0.06 percentage points is taken off of gross domestic output (GDP) for the affected region this year.