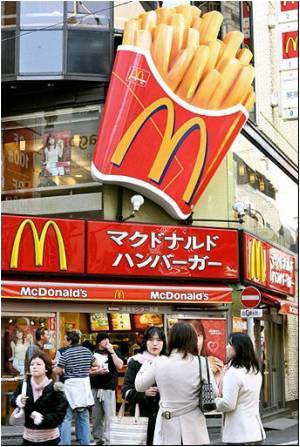 The Center for Science in the Public Interest has alleged that fast-food giant McDonald's exploits kids by using toys and has threatened to sue the company if it does not stop using Happy Meal toys for promotional within 30 days.

CSPI has already entangled with KFC after taking issue with artery-clogging trans fats and this move against McDonald's appears to be identical to its previous ones.

"Tempting kids with toys is unfair and deceptive, both to kids who don't understand the concept of advertising, and to their parents, who have to put up with their nagging children," said Michael Jacobson, executive director of the Center for Science in the Public Interest.


CSPI said that use of toys to lure kids is illegal under laws in several states including California, Texas and Massachusetts.

"It's a creepy and predatory practice that warrants an injunction," said a statement issued by Stephen Gardner, CSPI's litigation director. However McDonald's has claimed that getting a toy was just part of the fun experience for families at its outlets.

Low calorie meals or diet include foods that are high on nutritional content and yet have fewer calories. Updated information about low calorie diet or low calorie foods and its health benefits.
Advertisement
Advertisement
This site uses cookies to deliver our services.By using our site, you acknowledge that you have read and understand our Cookie Policy, Privacy Policy, and our Terms of Use  Ok, Got it. Close
×