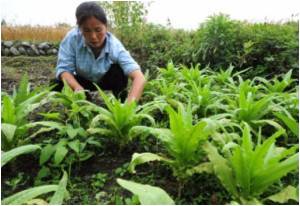 A synthetic chemical that mimics a naturally produced stress hormone in plants to help them cope with drought conditions has been discovered by scientists.

Led by researchers at The Medical College of Wisconsin, the researchers found that by understanding how pyrabactin works, other more effective chemicals for bringing drought-resistance to plants can be developed more readily.

Plants naturally produced a stress hormone, abscisic acid (ABA), in modest amounts to help them survive drought by inhibiting growth. ABA has already been commercialized for agricultural use. But it has at least two disadvantages: it is light-sensitive and costly to make.


Pyrabactin, on the other hand, is relatively inexpensive, easy to make, and not sensitive to light. But its drawback is that, unlike ABA, it does not turn on all the "receptors" in the plant that need to be activated for drought-tolerance to fully take hold.
Advertisement
A receptor is a protein molecule in a cell to which mobile signaling molecules - such as ABA or pyrabactin, each of which turns on stress-signaling pathways in plants - may attach.

Usually at the top of a signaling pathway, the receptor functions like a boss relaying orders to the team below that then proceeds to execute particular decisions in the cell.

Each receptor is equipped with a pocket, akin to a padlock, in which a chemical, like pyrabactin, can dock into, operating like a key. Even though the receptor pockets appear to be fairly similar in structure, subtle differences distinguish a pocket from its peers.

The result is that while ABA, a product of evolution, can fit neatly in any of these pockets, pyrabactin is less successful. Still, pyrabactin, by being partially effective (it works better on seeds than on plant parts), serves as a leading molecule for devising new chemicals for controlling stress tolerance in plants.

Cutler explained that each receptor is equipped with a lid that operates like a gate. For the receptor to be activated, the lid must remain closed. Pyrabactin is effective at closing the gate on some receptors, turning them on, but cannot close the gate on others. The researchers have now cracked the molecular basis of this behavior.

"A key insight from the current work is that this difference is controlled by subtle differences between the receptors in their binding pockets," said Cutler, an associate professor of plant cell biology in the Department of Botany and Plant Sciences and one of the members of the research team.

He explained that in a receptor where the gate closes, pyrabactin fits in snugly to allow the gate to close. In a receptor not activated by pyrabactin, the chemical binds in a way that prevents the gate from closing and activating the receptor.

"These insights suggest new strategies for modifying pyrabactin and related compounds so that they fit properly into the pockets of other receptors," Cutler said.

According to Cutler, pyrabactin has paved the way for manufacturing new molecules that activate or turn on receptors.

"For it to be a good agriculture chemical, however, it needs to turn on more receptors by fitting into their pockets," he said. "If a derivative of pyrabactin could be found that is capable of turning on all the receptors for drought tolerance, the implications for agriculture are enormous. The current research is an important step on the way to what is likely to be the next big result: an ABA-mimicking chemical that can be sprayed on corn, soy bean and other crops."

The research was reported in Nature Structural and Molecular Biology (online) on Aug. 22.