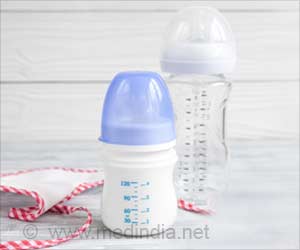 Huge rise in NHS spending on specialist formulas, but no evidence of such a large increase in infants CMPA condition. He names prominent individuals involved in developing cows' milk allergy guidelines who receive funding from the formula industry for activities such as research, consultancy, and lectures - as well as industry-funded bodies that run allergy training for healthcare professionals - creating a potential for bias.

Taken together, his findings raise the question of industry driven overdiagnosis of CMPA with potential for harm to mothers and children - and prompt calls for more independence. Between 2006 and 2016, prescriptions of specialist formula milks used to treat CMPA increased by nearly 500% from 105,029 to over 600,000, while NHS spending on these products increased by nearly 700% from £8.1 million to over £60 million annually. But the data give no indication of such a large increase in the number of infants with the condition.

If you are allergic to certain food items-Watch out for what you eat
Advertisement
‘The BMJ reports what appears to be a violation of the code that prevents advertising by formula manufacturers in hospitals and other health facilities.’

Furthermore, many milk allergy guidelines have direct or indirect support from industry, and are often written by experts with interests in formula manufacturers.


And, despite a World Health Organisation (WHO) code of practice that aims to restrict companies from sponsoring educational events, links to industry sponsored courses on CMPA can be found at The Allergy Academy, the British Society for Allergy and Clinical Immunology (BSACI), Allergy UK and other industry funded websites.

Breast Milk: The Mother of All Milk for Infants

Enabling the child with the best nutrition from the word 'Go' should not be mere wishful-thinking, and in this age of information, the goodness of breast milk must be clearly understood...
Advertisement
When contacted by The BMJ, several guideline authors acknowledged concerns about the influence of industry, but said there was no direct influence over the guidelines or their own practice. The BSACI said they work with industry in a responsible way "to help us fulfil our aims and objectives ensuring healthcare professionals are able to treat patients as effectively as possible." The Royal College of Paediatrics and Child Health (RCPCH) - the professional body for child health in the UK - says their sponsorship relates only to specialist formulas, not breast milk substitutes. But Nigel Rollins at WHO says specialist formulas are unequivocally breast milk substitutes in the eyes of WHO, and are thus covered by the code. The belief that specialist formulas are exempt from the WHO code "may be enabling manufacturers to justify this network of links with clinicians and institutions to pursue a wider agenda," writes van Tulleken. Clinicians and patients who spoke with The BMJ are also concerned at the wide availability of industry funded online information promoting non-specific symptoms potentially indicating CMPA as a diagnosis in exclusively breastfed infants.

London-based GP Gary Marlowe said the symptom list in the Milk Allergy in Primary Care (iMAP) guideline is so broad it may lead to a concern about CMPA in healthy babies. Chi Eziefula, from the Department of Global Health at Brighton and Sussex Medical School says: "In a culture where breastfeeding rates fall off sharply after birth, there must be no risk of industry influence on guidelines or education of postnatal and paediatric caregivers. Instead, we need more infrastructure to support continued breastfeeding."

Anthony Costello, former director of WHO Maternal, Child and Adolescent Health and now a professor of Child Health at UCL, agrees and calls for the RCPCH to be independent. "In the UK we have one of the lowest breastfeeding rates in the world," he says. "The WHO code is not enforced strongly in British law so we need the royal college to stop accepting money from industry and defend the global codes set up to try to protect mothers." But the college says the vast majority of its members felt the RCPCH should accept funding with a robust set of safeguards in place.

Meanwhile, the industry strongly believes they have a role to play both in scientific research and the education of healthcare professionals.

Declan O'Brien, director general of the British Specialist Nutrition Association, whose members include Danone Nutricia, Mead Johnson and Nestlé, says: "We recognise the need to put in place policies to ensure that potential conflicts of interest can be managed and avoided. The measures in The Infant Formula Industry (INI) Code are in line with the WHO Code, UK regulations, the ABPI Code and GMC Guidance."

Dr Fiona Godlee, The BMJ's Editor in Chief, says: "The growth in prevalence of CMPA has all the hallmarks of overdiagnosis fuelled by commercial interests. While recognising that some infants will develop CMPA, we need tighter diagnostic criteria and guidelines drawn up by experts who are free from financial conflicts of interest. In light of this investigation and our own growing concerns, BMJ is reviewing our policies on accepting advertising for these products. We will report back early in the new year."

Test Your Knowledge on Food Allergy

Food allergy is an abnormal response of the body to certain kinds of food. The signs and symptoms may be mild to severe. Symptoms such as flu or common cold often seems trivial or go unnoticed. But, food allergy is not to be confused with food intolerance. Food allergy is prevalent in 1 in 20 children and about 2 in 100 adults. The majority of allergies in food are not severe, however a chi
Advertisement
<< Youth Factor in Blood Cells That Speeds Fracture Repair Disc...
Women Who Miss Cervical Cancer Screenings Could be Asked to ... >>

Why Do We Eat - Nutrition Facts
News Archive
News Resource
Advertisement
News Category
School Traffic: Danger for Kids Can Early-term Births Increase ADHD Risk? How to Reduce Asthma Attacks In Underprivileged Youth? Can BCG Vaccine Prevent Tuberculosis in Young Children? How Does Disordered Eating Develop in Kids?
More News
Sign up for Wellness Consult a Doctor Sign up for Selfcare

More News on:
Allergy Pasteurization of milk Types of Milk Why Do We Eat - Nutrition Facts Diet Lifestyle and Heart Disease Types of Food Allergies The Acid-Alkaline balance, Diet and Health Acid Base Dietary Balance and its Influence on Our Health and Wellbeing Dealing with Pollen Allergy Remedies for Seasonal Allergy Relief