COVID-19: Increased Risk of Poisoning Associated With Use of Alcohol Based Sanitizer. 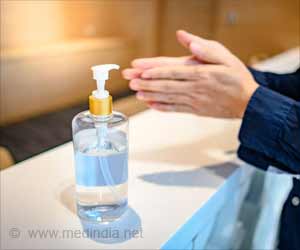 Cases of intentional and unintentional sanitizer poisoning have been reported. During this COVID-19 pandemic the poisoning cases have soared.

In the United Kingdom, alcohol based hand sanitizer poisonings reported to the National Poisons Information Service (NPIS) increased by 157%. From 1 January 2019 to 16 September 2019 the cases reported were 155. On the contrary from January 1 and September 14 2020 the 398 cases were reported.

Healthy eating habits and adherence to physical activity are required during COVID-19 lockdown. WHO has prepared a set of general tips that you could follow during the lockdown to stay fit and healthy.
Advertisement
‘There is an increase in intentional and unintentional cases of alcohol poisoning due to easy availability of hand sanitizers due to the ongoing pandemic. Public awareness is an important step to decrease and control the poisoning cases.’
Read More..

The major requirement is to protect those at higher risk of intentional or unintentional swallowing of alcohol based sanitizer. Population at a higher risk are children, people with confusion/ dementia or people with mental health problems.


" If providers are supplying alcohol-based hand sanitizers in the community to reduce the spread of SARS-CoV-2, the contents should be supplied in lockable and automated dispensers to reduce contamination and improve safety ," said Georgia Richards, DPhil student, Centre for Evidence-Based Medicine, Nuffield Department of Primary Care Health Sciences, University of Oxford, England.

Any person with a history of anaphylaxis to a medicine or food should not be vaccinated with Pfizer-BioNTech COVID-19 vaccine states MHRA. Pfizer states allergic reactions had not been a feature of Pfizer's clinical trials and was excluded.
Advertisement
Alcohol-based Sanitizer Poisoning cases soar in US and Europe

In the paper published in the BMJ journal Richards mentioned about two deaths that occurred in hospitals in England.

The first case was of a 30 year old woman, from the psychiatric unit. She received an antidepressant venlafaxine. She was found dead with a container of hand sanitizing gel beside her. Richards reports," The gel was readily accessible to patients on the ward from a communal dispenser, and patients were allowed to fill cups or other containers with it to keep in their rooms. "

A post-mortem showed high levels of alcohols in her blood-214 mg of alcohol in 100 ml of blood. The medical cause of death was listed as "ingestion of alcohol and venlafaxine." This combination led to death by suppressing the patient's breathing.

Another case was of a 76 year old man who unintentionally swallowed unknown quantities of sanitizer containing alcohol. The sanitizer was attached to the foot of his hospital bed. The patient had a history of agitation and depression. The patient was on antidepressant. He experienced increasing confusion since past 9 months. The probable cause of this confusion was vascular dementia.

The patient's blood sample showed 463 mg/dl ethanol in it initially and 354 mg/dl ethanol 10 hours later. He was to the Intensive care unit. He received lorazepam and haloperidol (antipsychotics). It was planned to allow alcohol to naturally metabolize. The patient developed complications and died 6 days later. The causes of death were acute alcohol poisoning, bronchopneumonia, acute delirium, and coronary artery disease.

Alcohol based sanitizer has become an essential commodity worldwide since the beginning of this COVID-19 pandemic. The amount and increased quantity of these sanitizers found in hospitals, homes, schools, workplaces etc may be one of the major causes of poisoning.

To decrease the number of poisoning cases it is important to educate the people about alcohol toxicity and its complications. Increased cases of alcohol based hand sanitizer poisoning have been recorded in the US too.

Richards states, " While governments and public health authorities have successfully heightened our awareness of, and need for, better hand hygiene during the COVID-19 outbreak, they must also make the public aware of the potential harms and encourage the reporting of such harms to poisons information centers. "

The American Association of Poison Control Centers (AAPCC) reports that data from the National Poison Data System (NPDS) show 32,892 hand sanitizer exposure cases reported to the 55 US poison control centers from January 1 through November 15, 2020. This accounts for an increase of 73% compared with the same time period during the previous year.

Intentional toxicity cases increase Robert Bassett, DO, associate medical director of The Poison Control Center at Children's Hospital of Philadelphia, Pennsylvania, told," Cleaning agents and disinfectants have been around for eons and their potential for toxicity hasn't changed. Now with COVID, and this hyper-vigilance when it comes to cleanliness, there is increased access and the exposure risk has gone up. One of the sad casualties of an overstressed healthcare system and a globally depressed environment is worsening behavioral health emergencies and, as part of that, the risk of self-harm goes up. The consensus is that there has been an exacerbation of behavioral health emergencies and behavioral health needs since COVID started and hand sanitizers are readily accessible to someone who may be looking to self-harm."

Standing 6 Feet Apart? Still Coronavirus can be Transmitted Through Cough

Cough can send coronavirus farther than 6 feet. Cough droplets travel a distance greater than 6 feet and hence can spread COVID-19.