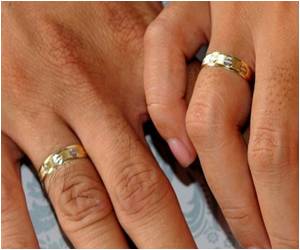 Rusmir, a Bosnian Muslim and his wife Sandra Zaimovic, a Catholic Bosnian Croat, are looking forward to celebrating both Eid and Christmas with their new baby this year.

Couples of different ethnicity like the Zaimovics were a rarity in the years following the 1992-1995 war which divided Bosnia along ethnic lines, but today they are slowly reappearing, reflecting the country's growing diversity.

"It is an advantage for children to grow up in two cultures and I am very happy that, while I am a Catholic, my last name is Muslim," says Sandra, a 32-year-old charity worker.


Rusmir and Sandra, herself a child of a mixed marriage between a Bosnian Croat mother and Serb father, met in 2003 at a friend's party.

They were married two years later, one of the rare ethnically mixed marriages in Bosnia to take place since the war.
Advertisement
"Ours is a marriage of love -- we have never asked any questions about our ethnicity or our faith," says 33-year-old computer engineer Rusmir Zaimovic.

Their families had no objections, but many others have queried their relationship.

"I often meet people who ask me how my mother has reacted, how the two of us manage everything. Remarks like that remind me where we live," says Sandra.

Over the years, however, Sandra and Rusmir have made a tight network of friends, many of whom are also ethnically mixed couples, or those who find no fault with their life choices.

The former Yugoslav republic was once a shining example of diversity, but Bosnian society was torn apart during the war that pitted its three main ethnic communities - Serbs, Croats, and Muslims - against each other.

Many mixed couples were unable to resist the pressures of the time and either split up or left the country.

Most have never returned.

Today the country has a population of just 3.8 million, of which 40 percent are Muslim, 31 percent Serb (mainly Orthodox Christian) and 10 percent Bosnian Croat.

Over two million people were forced from their homes during the war, in which 100,000 died.

In 1992, before war broke out, nearly 13 percent of all married couples in Bosnia were multi-ethnic, but today they number just four percent.

While there are no reliable statistics for the years immediately following the war, the current figure is likely to be an increase on the late 1990s and early 2000s, when ethnic divisions remained deeply entrenched.

The campaign of "ethnic cleansing" led by Bosnian Serbs against Bosnian Muslims, including the July 1995 Srebrenica massacre of 8,000 Muslim men and boys -- designated as genocide by two international courts -- destroyed any veneer of peaceful coexistence between communities.

The ethnologist Ugo Vlaisavljevic confirms that the psychological scars of the war run deep. "As a consequence of the horrors of war that we experienced in the 1990s a deep distrust between the people emerged... and of course this has had a considerable impact on people's personal lives."

Neda Perisic, an anthropologist, points out that couples like the Zaimovics face more than societal pressure, highlighting the institutional discrimination inherent in the political system imposed by the 1995 peace accord.

"In Bosnia, there are no individual, but only collective rights," she says, explaining that almost all jobs in public administration or state-controlled companies are reserved for members of the three so-called constituent communities.

According to Bosnia's constitution, the country is made up of three constituent peoples: Muslims, Serbs and Croats - and 'others', a category which encompasses all other ethnic groups living in the country.

In a system based on the rights given to each of the three main ethnic groups, those who are considered to be 'other' face fewer opportunities, she warns, continuing "in a system like this, children from mixed marriages are marginalised."

As children of mixed ethnicity are classified as 'other', Perisic says that as adults they will have little chance of finding work in the public sector, which is by far the largest employer in the country.

Given that Bosnia currently struggles with unemployment of over 40 per cent, this is a significant handicap.

Nearly a generation may have passed since the war but prejudices persist, as a recent article by well-known Bosnian Serb actor and director Nikola Pejakovic shows. In his weekly column in the biggest Bosnian Serb daily, Pejakovic described mixed marriages as a "misfortune", writing: "They were a part of the (former) Yugoslav communist regime plan to play with people and genetics."

The multi-ethnic actor Sanin Milavic, who is himself in a mixed marriage, retaliated: "Get the hell out of my bedroom!" in a post on his Facebook page which went viral.

"Here, you're given an identity at birth, like a cow branded with a hot iron, as if identity is not something we construct," Milavic said.

Summing up the problems faced by children of mixed ethnicity, he said: "I am not worried about myself, but for my son who, according to the constitution of this country, does not exist."

Patient Fight for Religious Tolerance in Bosnia
Bosnia continues to move on a slow, but steady path of religious tolerance....

Outraged Bosnians Protest for Failing to Curb Juvenile Violence
Up to 10,000 people protested in Sarajevo on Saturday against juvenile crime after the brutal ......