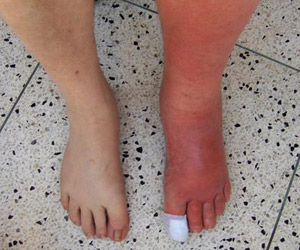 Misdiagnosis of cellulitis is associated with unnecessary hospitalizations and antibiotic use, as well as avoidable health care spending.

Cellulitis leads to about 2.3 million emergency department visits annually in the United States and between 14 percent and 17 percent of those patients are admitted to the hospital. However, many inflammatory conditions of the skin mimic cellulitis and are known as "pseudocellulitis."

Cellulitis is a bacterial infection of the skin and subcutaneous tissues that affects all age groups. Erysipelas, necrotizing fasciitis, and periorbital cellulitis are the 3 types of cellulitis.
Advertisement
‘Misdiagnosed cellulitis leads to between 50,000 and 130,000 unnecessary hospitalizations and $195 million to $515 million in avoidable health care spending.’
Tweet it Now

Arash Mostaghimi, M.D., M.P.A., M.P.H., of the Brigham and Women's Hospital and Harvard Medical School, Boston, and coauthors examined the costs and consequences of misdiagnosed cellulitis. The authors examined data for patients admitted from the emergency department of a large urban hospital with a diagnosis of lower extremity cellulitis between June 2010 and December 2012. Patients were considered to have "pseudocellulitis" if they were given an alternative diagnosis during their hospital stay, on discharge or within 30 days of discharge.

Chromoblastomycosis, a chronic fungal skin disease, infects the skin and subcutaneous tissue through the opening of a traumatic injury. This dermatiaceous fungal infection responds slowly to fungal treatment.
Advertisement
A clinical review suggests that 44 of the 52 patients with misdiagnosed cellulitis would not have required hospital admission if they had been diagnosed correctly. Additionally, 48 (92 percent) of the 52 misdiagnosed patients would not have required any antibiotics based on their ultimate diagnoses, according to the report.

The authors estimate that misdiagnosed cellulitis leads to between 50,000 and 130,000 unnecessary hospitalizations and $195 million to $515 million in avoidable health care spending, not accounting for the costs of antibiotics and other complications that may result from unnecessary treatment.

Unnecessary antibiotics and hospitalizations for misdiagnosed cellulitis also were projected to cause other serious infections, including Clostridium difficile. Study limitations include the generalizability of the findings because the investigation was conducted at a single institution. The authors used conservative estimates to present the range of costs and therefore may have underestimated the true cost of misdiagnosis.

"Our study serves as a call to arms for improving the care of patients with suspected lower extremity cellulitis. A combination of systems improvement and further categorization of the biology of cellulitis may lead to a combination of clinical findings and biomarkers that will reduce incorrect diagnosis," the study concludes.

Dermatomyostitis (DM) is an uncommon, inflammatory disease affecting the connective tissues. It is characterized by symptoms such as skin rashes and muscle weakness.
Advertisement

Eye lid problems are one of the commonest complaints with which a patient presents to an eye doctor. ...
This site uses cookies to deliver our services.By using our site, you acknowledge that you have read and understand our Cookie Policy, Privacy Policy, and our Terms of Use  Ok, Got it. Close
×