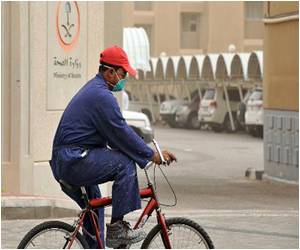 The health minister said in comments published by local media that the MERS coronavirus has killed 10 people and infected 68 in the United Arab Emirates since March 2013.

Coronaviruses have recently been confirmed to represent a serious threat, as they have been on the watch list for emerging pathogens since the SARS epidemic 2003.
Advertisement

He also said 68 people have been infected since March 2013 when the country's first case of MERS was diagnosed.


In April, health authorities in the UAE said a Filipino paramedic diagnosed with the disease in the eastern city of Al-Ain had died.

Neighbouring Saudi Arabia remains the country worst hit by the virus. The kingdom's health ministry revised its own death toll from the virus on Tuesday from 190 to 282 people.

With the death of an elderly woman from the MERS coronavirus, the death toll from the respiratory disease in Saudi Arabia has risen to 61 Saudi health authorities said.
Advertisement
It said the hike was due to a "comprehensive revision" tracing patients' files back to 2012, when the first case was diagnosed.

Like SARS, it appears to cause a lung infection, with patients suffering coughing, breathing difficulties and a temperature. But MERS differs in that it causes rapid kidney failure.

A number of existing pharmaceutical drugs and compounds under development may be effective against the Middle East Respiratory Syndrome, researchers have found
Advertisement
<< Are E-Ciggies So Cool?
Soda Consumers Drinking More Fructose Than Labels Reveal: S... >>

Blood - Sugar Chart Hearing Loss Calculator Pregnancy Confirmation Calculator Selfie Addiction Calculator Drug Side Effects Calculator The Essence of Yoga Vent Forte (Theophylline) A-Z Drug Brands in India Find a Hospital Find a Doctor
This site uses cookies to deliver our services. By using our site, you acknowledge that you have read and understand our Cookie Policy, Privacy Policy, and our Terms of Use