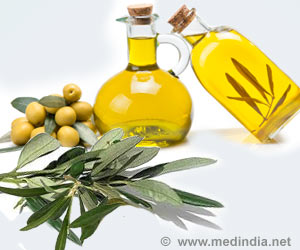 As compared to extra virgin olive oil, corn oil was found to be more effective in reducing cholesterol and bringing favorable changes in the total cholesterol, a new study found. The findings were presented today at the American Society for Nutrition's Advances & Controversies in Clinical Nutrition Conference by lead researcher, Dr. Kevin C Maki, PhD, of Biofortis, the clinical research arm of Mérieux NutriSciences.


The study compared the effects of corn and extra virgin olive oil on LDL cholesterol (primary outcome variable), total cholesterol, HDL cholesterol (good cholesterol), Non-HDL cholesterol, Triglycerides and the total to HDL cholesterol ratio. Study participants had fasting LDL cholesterol ≥130 mg/dL and <200 mg/dL. Fasting blood samples, along with other clinical measurements, were taken from all participants during visits to the clinical study center before and after each treatment phase of the study. "The study results suggest corn oil has significantly greater effects on blood cholesterol levels than extra virgin olive oil, due, in part, to the natural cholesterol-blocking ability of plant sterols," said Dr. Maki. "These findings add to those from prior research supporting corn oil's positive heart health benefits."
Advertisement
Cardiovascular disease remains the number one cause of death in the United States. Existing research supports the notion diets containing at least 5-10 percent of calories from polyunsaturated fatty acids (PUFAs) from vegetable oils, are associated with lower risk for heart disease.4

Corn oil has a unique combination of healthy fatty acids and plant sterols, which research suggests help lower cholesterol.4,5 Corn oil has four times more plant sterols than olive oil and 40 percent more than canola oil.6 Based on analysis of corn oil and 2013 USDA comparison of other cooking oils, corn oil has a plant sterols content of 135.6 mg/serving vs. 30.0 mg/serving for olive oil.7 Plant sterols are plant-based substances naturally present in fruits, vegetables, nuts, seeds, cereals, legumes and vegetable oils, such as corn oil. To the extent that plant sterols play a part in reducing blood cholesterol levels, they could have an important role in a heart healthy diet.

Source: Eurekalert
Advertisement
<< Treatment Response in Ovarian Cancer Gets Easier Thanks to ...
Economic Crisis Hits 69 Percent of Households in Italy >>

Tomato Sauce With Onion, Corn Flour and Olive Oil is Heart Protective
The secret to a healthy heart could just be as simple as tomato sauce made with onion, olive oil ......

Olive Oil Demands Get Higher in India With the Hypertension and Heart Disease Cases
Owing to the rapid increase in the numbers of people suffering from hypertension, heart disease and ...

Reasons Behind Health Benefits of Chocolates and Olive Oil Examined
A new study is currently focusing on the health benefits of antioxidant substances found in dark ......

Extra Virgin Olive Oil Loses Health Benefits on Being Heated
New study states that purchasing it is a waste of money as the oil loses most of its health ......