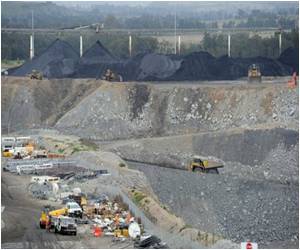 According to a simple math-driven formula, refrigerating coal-plant emissions would reduce levels of dangerous chemicals that pour into the air including carbon dioxide by more than 90 percent. This comes at a cost of 25 percent efficiency. The formula was designed by a team of University of Oregon physicists.

The computations for such a system, prepared on an electronic spreadsheet, appeared in Physical Review E, a journal of the American Physical Society.

Much of the concern over global warming focuses on coal. But a new technology in the making in Australia could double power extracted from coal while minimizing greenhouse gas emissions.
Advertisement

In a separate, unpublished and preliminary economic analysis, the scientists argue that the "energy penalty" would raise electricity costs by about a quarter but also reap huge societal benefits through subsequent reductions of health-care and climate-change costs associated with burning coal. An energy penalty is the reduction of electricity available for sale to consumers if plants used the same amounts of coal to maintain electrical output while using a cryogenic cleanup.


"The cryogenic treatment of flue gasses from pulverized coal plant is possible, and I think affordable, especially with respect to the total societal costs of burning coal," said UO physicist Russell J. Donnelly, whose research team was funded by the U.S. Department of Energy for the work detailed in the published journal article.

Citi Bank and Bank of America are financing coal-based power plants in a big way and that is directly contributing to global warming. This should be stopped forthwith.
Advertisement
"In the U.S., we have about 1,400 electric-generating unit powered by coal, operated at about 600 power plants," Donnelly said. That energy, he added, is sold at about 5.6 cents per kilowatt-hour, according to a 2006 Congressional Budget Office estimate. "The estimated health costs of burning coal in the U.S. are in the range of $150 billion to $380 billion, including 18,000-46,000 premature deaths, 540,000 asthma attacks, 13,000 emergency room visits and two million missed work or school days each year."

In their separate economic analysis, Donnelly and UO research assistant Robert E. Hershberger, also a co-author on the journal paper, estimate that implementing large-scale cryogenic systems into coal-fired plants would reduce overall costs to society by 38 percent through the sharp reduction of associated health-care and climate-change costs. Not in the equation, Donnelly said, are the front-end health-care costs involved in coal extraction through mining.

The cryogenic concept is not new. Donnelly experimented briefly in the 1960s with a paper mill in Springfield, Ore., to successfully remove odor-causing gasses filling the area around the plant using cryogenics. Subsequently the National Science Foundation funded a major study to capture sulfur dioxide emissions -- a contributor to acid rain -- from coal burning plants. The grant included a detailed engineering study by the Bechtel Corp. of San Francisco.

The Bechtel study showed that the cryogenic process would work very well, but noted that large quantities of carbon dioxide also would be condensed, a consequence that raised no concerns in 1978. "Today we recognize that carbon dioxide emissions are a leading contributor to climate-warming factors attributed to humans," Donnelly said.

Out came his previously published work on this concept, followed by a rigorous two-year project to recheck and update his thermodynamic calculations and compose "a spreadsheet-accessible" formula for potential use by industry. His earlier work on the cryogenic treatment of coal-plant emissions and natural gas sources had sparked widespread interest internationally.

While the required cooling machinery would be large -- potentially the size of a football stadium -- the cost for construction or retrofitting likely would not be dramatically larger than present systems that include scrubbers, which would no longer be necessary, Donnelly said. The new journal article does not address construction costs or the disposal of the captured pollutants, the latter of which would be dependent on engineering and perhaps geological considerations.

According to the Physical Review E paper, carbon dioxide would be captured in its solid phase, then warmed and compressed into a gas that could be moved by pipeline at near ambient temperatures to dedicated storage facilities that could be hundreds of miles away. Other chemicals such as sulfur dioxide, some nitrogen oxides and mercury also would be condensed and safely removed from the exhaust stream of the plants.

"This forward-thinking formula and the preliminary analysis by these researchers offer some exciting possibilities for the electric power industry that could ultimately benefit human health and the environment," said Kimberly Andrews Espy, UO vice president for research and innovation. "Scientists at the University of Oregon are continuing to develop new ideas and advanced materials to foster a sustainable future for our planet and its people."

The six-day protest launched by environmental activists in Australia against coal operations at New Castle is intensifying.
Advertisement
<< Doctors Aided By Review of New Evidence to Treat Colonic Div...
ICU Misdiagnoses may Account for as Many Annual Deaths as B... >>

India's Excessive Use of Coal Protested by Greenpeace Activists