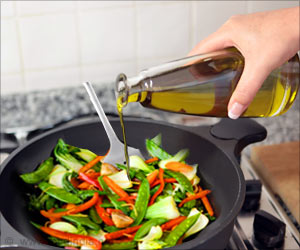 Using extra virgin olive oil for cooking vegetables can absorb and release bioactive compounds such as carotenoids and polyphenols present in the traditional sofrito ingredients, reports a new study. The findings of the study are published in the science journal Molecules.

Cooking vegetables in the sofrito (sauté) with extra virgin olive oil favours the absorption and release of bioactive compounds of its traditional ingredients (garlic, onion and tomato), according to the study conducted by a research team of the Faculty of Pharmacy and Food Sciences at the University of Barcelona (UB), from the Physiopathology of Obesity and Nutrition Networking Biomedical Research Centre (CIBERobn) and the Diabetes and Associated Metabolic Diseases Networking Biomedical Research (CIBERDEM), led by the tenure lecturer Rosa M. Lamuela.

Advertisement
‘Is olive oil a good cooking oil? Yes, cooking vegetables in the sofrito with extra virgin olive oil favors the absorption and release of bioactive compounds of its traditional ingredients such as garlic, onion, and tomato.’
Read More..

These results allow an insight on the mechanisms with which gastronomy could play a relevant role in the health-improving effects of the Mediterranean Diet.


The Mediterranean diet, known for high consumption of phytochemicals from vegetables, fruits, and legumes, has been correlated to health-improving effects in cardiovascular and metabolic health. This relation is mainly based on the results of the PREDIMED study, a multicentre clinical trial carried out from 2003 to 2011 with more than 7,000 people and in which Rosa M. Lamuela took part too.
Advertisement
However, the effects regarding health in the Mediterranean diet have been hard to reproduce in non-Mediterranean populations, probably, according to the researchers, due to differences in cooking practice. Therefore, researchers try to assess whether the Mediterranean gastronomy can bring health benefits, not only for its food but also for the way they are cooked.

Sofrito: A Key Element in the Mediterranean diet

In this context, the objective of the study was to assess the effect of the extra virgin olive oil in bioactive compounds in tomato, onion, and garlic -traditional ingredients in sofrito, one of the key cooking techniques in the Mediterranean diet. According to the researchers, this sauce has forty different phenolic compounds and a high amount of carotenoids, and its consumption is associated with an improvement of the cardiovascular risk parameters and insulin sensitivity.

"The main result of the study is that cooking vegetables with extra virgin olive oil favors the bioactive compounds, such as carotenoids and polyphenols that are present in vegetables we find in sofrito, to move to the olive oil, which enables the absorption and bioactivity of these compounds", says Rosa M. Lamuela, director of the Institute for Research on Nutrition and Food Safety (INSA-UB).

From Vegetables to Olive Oil

The study also found out a new trait of olive oil. So far, researchers had stated that this oil and onion can produce isomers -molecules with the same molecular formula but with different traits- from carotenoids, variants which are more bio-available and have a higher antioxidant capacity. However, the study proved that oil plays an essential role in this process, not only in carotenoids, but also in polyphenols, which go from vegetables to the oil.

These results could explain the causes for which previous studies by this research group had stated that the presence of oil increases the anti-inflammatory effect in the tomato sauce. "We saw that this increase can occur due the migration of bioactive compounds (carotenoids and polyphenols) from the tomato to the oil during the cooking process, which favors the absorption of these compounds," concludes José Fernando Rinaldi de Alvarenga, INSA-UB member and first author of the study.

More News on:
Mediterranean Diet Why Do We Eat - Nutrition Facts Diet Lifestyle and Heart Disease High Blood Pressure and Herbs The Acid-Alkaline balance, Diet and Health Acid Base Dietary Balance and its Influence on Our Health and Wellbeing Health benefits of bananas Olive Oil and Its Benefits Diet, Nutrition and Supplements for Osteo-Arthritis and Rheumatoid Arthritis Snake Gourd Glory

Eating Olive Oil can Help Obese People Ward off Heart Attack, Stroke
Adding olive oil to your diet at least once a week decreases your risk of blood clots which can ......