A father grabs his daughter''s arm before she runs out into traffic, and the sudden pull produces sharp pain and loss of movement in her arm. All this can actually happen in an instant.

Pulled elbow or "nursemaid''s elbow" is a common injury among children, and usually is fixed by a physician manipulating one of the bones of the elbow joint back into place. However, a new review of research suggests that the textbook way of treating the injury might not be the best approach.


The review appears in the latest issue of The Cochrane Library, a publication of The Cochrane Collaboration, an international organization that evaluates medical research. Systematic reviews like this one draw evidence-based conclusions about medical practice after considering both the content and quality of existing medical trials on a topic.


Pulled elbow occurs when the head of the radius - the bone on the thumb side of the forearm - is pulled free of the strong band of ligament fibers that binds the radius to another forearm bone called the ulna.

Diagnosing nursemaid''s elbow can be a little tricky, since usually the elbow is not swollen or tender to the touch, and an X-ray might not reveal the slippage, said Michael Davis, M.D., a pediatrician at the Nemours Children''s Clinic in Pensacola, Fla.

Instead, a parent or doctor can recognize the condition if "a child holds her arm to her side with the palm of the hand facing toward the back," while complaining of pain and refusing to use the arm, he said.

Typically, physicians treat the conditions by slipping the radial head back into position by twisting the forearm so that the child''s palm is facing up, while sometimes flexing the arm at the elbow.

"While this has become standard practice, it is not always successful," wrote the reviewers led by Marjolein Krul, M.D., a general practice researcher at the Erasmus MC University Medical Center in Rotterdam, Netherlands.

Instead, Krul and colleagues'' review of the medical literature suggests that a technique that twists the forearm so that the palm is facing down might be a more effective and less painful way of treating the injury.

Still, the researchers caution that the palm-down technique is only slightly more effective, based on the three, mostly low-quality studies that they examined.

"Pulled elbow is almost only seen among young children, because their ligaments and the tissue surrounding the radial head are relatively soft," Krul said. "The injury is described as being most common in the left arm and among girls."

In their analysis of three studies with 313 children, all younger than seven years old, Krul and colleagues found that the physicians who used the palm-down method were more successful in popping the radial head back into place on the first try, compared to those who used the palm-up method.

"But both methods are generally safe, although bruising can occur and they can be painful," Krul said.

"Children who have had nursemaid''s elbow may be at a slight increased risk for repeat injury," said Davis, who simply recommends caution when pulling on the child''s arm. 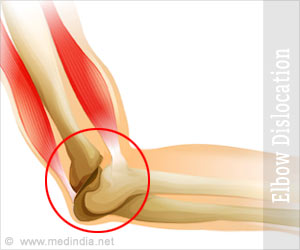