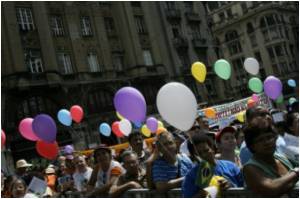 In New York a billboard featuring a young black girl has created an outrage because of its anti-abortion message - the most dangerous place for an African-American is in the womb.

On display in the SoHo area of Manhattan, the poster advertises a Texas-based group called Life Always, which campaigns against what it calls a "genocidal plot" against unborn babies, reports the Telegraph.

On its website, Life Always states: "Abortions among African-American women are three times that of the rest of the population. Over 25 per cent of the next generation is being wiped out as we speak".

"Common decency demands it be taken down."

Christine Quinn, the Speaker of New York city council, said: "To refer to a woman's legal right to an abortion as a 'genocidal plot' is not only absurd, but offensive to women and to communities of color".

Statistics say that approximately 42 million abortions are done every year, worldwide. So take this quiz on abortion and get to know its essential facts.
Advertisement
<< Aussie Girls As Young As Nine Selling Sex For Drugs
Flexisexuality Fast Catching Up! >>

About 4,000 people took the streets Saturday in peaceful protest against abortion and for life in front of the Se Cathedral, seat of the archdiocese of Sao Paulo.

Selfie Addiction Calculator Accident and Trauma Care Sanatogen Vent Forte (Theophylline) Drug Interaction Checker Color Blindness Calculator Find a Hospital Post-Nasal Drip Find a Doctor Calculate Ideal Weight for Infants
This site uses cookies to deliver our services.By using our site, you acknowledge that you have read and understand our Cookie Policy, Privacy Policy, and our Terms of Use  Ok, Got it. Close
×